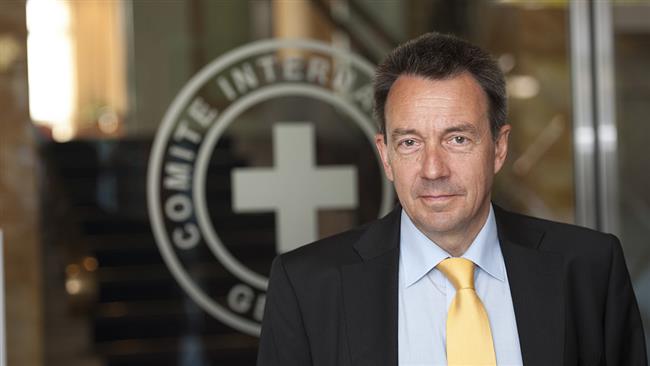 The International Committee of the Red Cross chief has said that the ICRC has increased its aid efforts for Yemen twofold in recent days, but more needs to be done to meet the demands in the country.

The president of the International Committee of the Red Cross (ICRC) has praised the Islamic Republic of Iran for its dispatch of humanitarian aid consignments to Yemen, where people are being targeted in a Saudi military campaign.

“We are grateful for the expression of support coming from the Iranian Red Crescent Society (IRCS) and the government of Iran for our operations in Yemen,” Peter Maurer said in a meeting with IRCS Secretary General Ali Asghar Ahmadi in Tehran on Wednesday.

Maurer added that humanitarian support for the people of Yemen is a major priority of his Geneva-based humanitarian institution, stating that the ICRC has increased its aid efforts for Yemen twofold in recent days, but a lot more needs to be done to meet the demands in the country.

He also deplored the persistent instability in Yemen, stressing the need for a political solution to the Yemeni conflict. He also pointed to the constant violation of human rights in Yemen, noting that the IRCS is in talks with the sides to the conflict in the Arab country to halt the fighting.

Maurer added that the conflict-stricken people of Yemen are in dire need of even very basic commodities.

Ahmadi, for his part, touched on the hurdles that the IRCS has faced while trying to dispatch aid cargoes to Yemen, saying the organization under his watch has already sent 5,000 tons of relief aid to Yemen.

He also expressed hope that condition will soon become conducive to the dispatch of a consignment of medical supplies to the Arab country.

On May 22, an Iranian cargo vessel carrying tons of medical aid and foodstuff for Yemen arrived in Djibouti, where international aid efforts for the Arab country are concentrated.

The Iranian ship, dubbed Nejat (Rescue), left the Iranian port city of Bandar Abbas on May 11, and carried 2,500 tons of basic supplies, including flour, rice, medicine, and water. Several international journalists, doctors, and anti-war activists were also aboard the ship.

On March 26, Saudi Arabia began its military aggression against Yemen – without a UN mandate – in a bid to undermine the Houthi Ansarullah movement and restore power to fugitive former Yemeni president Abd Rabbuh Mansour Hadi, an ally of Riyadh.

Tarik Jasarevic, a spokesman for the World Health Organization, said on July 28 that 1,859 civilians were among the total of 3,984 people killed in Yemen until July 19. Local Yemeni sources, however, put the fatality figure at much higher.