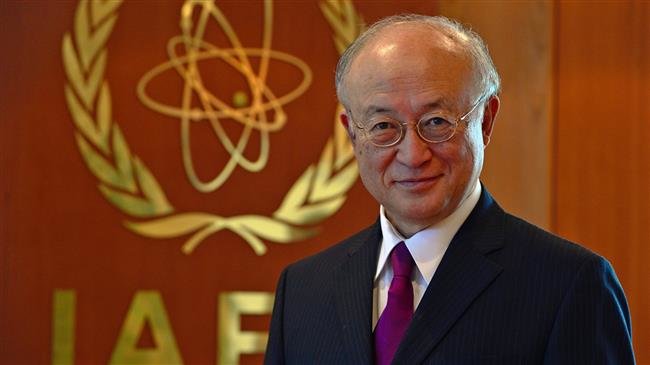 The head of the International Atomic Energy Agency (IAEA) has once again reaffirmed Iran's compliance with its nuclear-related commitments under a 2015 deal, known as the Joint Comprehensive Plan of Action (JCPOA).

“Iran is implementing its nuclear-related commitments under the Joint Comprehensive Plan of Action,” the IAEA Director General Yukiya Amano said in his  introductory statement  to the IAEA’s Board of Governors in Vienna on Monday.

“It is essential that Iran continues to fully implement those commitments,” he added.

The IAEA chief noted that his report on verification and monitoring in Iran in light of United Nations Security Council Resolution 2231 (2015) covers relevant activities of the IAEA in the country in the last few months.

US President Donald Trump withdrew Washington in May from the landmark Iran nuclear agreement, reached between Iran and the P5+1 group of countries in 2015, and decided to re-impose unilateral sanctions against Tehran.

Amano further said in his statement that the IAEA would continue to verify the “non-diversion of nuclear material” declared by Iran under its Safeguards Agreement.

“Evaluations regarding the absence of undeclared nuclear material and activities in Iran continue,” he noted.

Amano also said the IAEA carefully examines all safeguards-relevant information about implementing verification activities in Iran, but emphasized that this analysis “normally takes time, and takes action when appropriate.”

“The agency undertakes analysis and takes action in an impartial, independent and objective manner, within the existing safeguards framework and in line with established safeguards practice,” he added.

In a quarterly report on Friday, the IAEA said Iran continues to observe the restrictions on its nuclear activities under the deal it signed with global powers.

Iran remained within caps on the level to which it can enrich uranium and its stock of enriched uranium in accordance with the JCPOA, the report by the UN nuclear agency said, even as the US re-imposed sanctions against Tehran.

Trump’s administration announced re-imposition of the “toughest” sanctions ever against Iran’s banking and energy sectors with the aim of cutting off the country’s oil sales and crucial exports.

Despite Washington’s withdrawal, Iran has not left the deal yet, but stressed that the remaining signatories to the agreement have to work to offset the negative impacts of the US pullout for Iran if they want Tehran to remain in it.