How would a President Hillary Clinton deal with Iran? 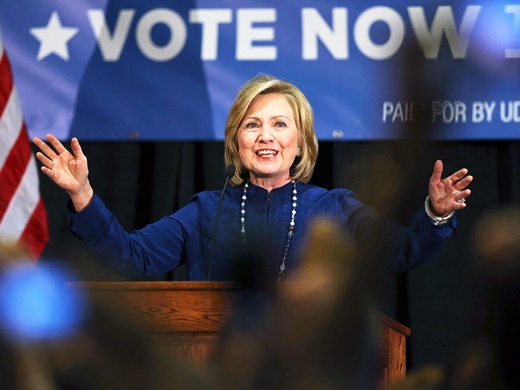 Four Iranian experts answer a hypothetical question: How would a President Hillary Clinton deal with Iran?

Former first lady, US Senator and Secretary of State Hillary Rodham Clinton ended months of speculations and threw her hat in the ring on Sunday, officially entering the 2016 presidential race.

Given that Iran and the United States are locked in a tussle over the former’s nuclear program, how would a former US top diplomat deal with Iran if she became the occupant of 1600 Pennsylvania Avenue in Washington D.C.?

An April 14 edition of Sharq daily has posed that question to four Iranian experts. The following is the translation of the answers they have provided to the reformist daily:

Given that the approval rating of Democrat President Barrack Obama has dropped to 43 percent, on the one hand, and his administration is at odds with Israel on the other, assumptions that the Democratic Party has lost the backing of the Israeli lobby would not be way off base. So next year’s presidential election is unlikely to see someone from the ranks of Democrats become the new occupant of the White House.

Even if we assumed that Hillary Clinton would win the presidential election, we couldn’t count on her to opt for interaction with Iran. Hillary comes from a noble family and has an inflated ego.

When she was secretary of state, she was at loggerheads with President Obama on several issues. She was in favor of military action against Syria and Iran and even threatened to quit.

I believe we need to strike a deal with the United States before President Obama leaves office.

The overall policy of Democrats in dealing with Iran is somewhat clear. There might have been some differences in their approaches over the decades, but the principles of their Iran policy have remained unchanged.

Assuming that Hillary Clinton wins the election, she is likely to follow President Obama’s approach. In light of the fact that she has been his secretary of state, her future policy will be somewhat influenced by Obama’s.

Of course, when she was secretary of state, at times she was at odds with her boss, but those differences are unlikely to have been centered on Iran. She will take measures to settle differences with Iran and re-establish ties.

However, one should not forget the fact that America’s ties with China and Russia will have much impact on Washington’s Iran policy.

Anyone who takes over as US President in less than two years will definitely be influenced by what will be happening in the world in 2017.

Ms. Clinton would opt for détente if the nuclear deal between Iran and P5+1 is implemented by then.

Under normal circumstances, Clinton is a Democrat but her policies would put her somewhere between Bush 43 and Barrack Obama. Although she was Obama’s secretary of state, she would adopt policies similar to her husband’s.

One can say her political stance is similar to Robert Menendez, a Democratic supporter of a tough Iran sanctions regime. When Bill Clinton was in office, Iran reached out to the US, but thanks to those who had vested interest in sanctions, those overtures produced no results.

When it comes to interaction and avoidance of hostility, Obama is the best choice for Iran, one that is unlikely to be repeated.

Even if the next president of the United States is a Democrat, s/he is unlikely to be as good as Obama for Iran.

If Hillary Clinton is elected president, she would not opt for confrontation with Tehran. But she should not be expected to follow in the footsteps of Obama in defying the Israeli lobby and Congress.

If the current US president is successful in settling the nuclear dispute, she will follow his lead.

But if things get complicated and efforts to settle the dispute linger into the term of the next US president, she would not be able to stand up to pressures as audaciously as Obama.

In short, a President Clinton will be more cautious and vulnerable in the face of pressures than President Obama.