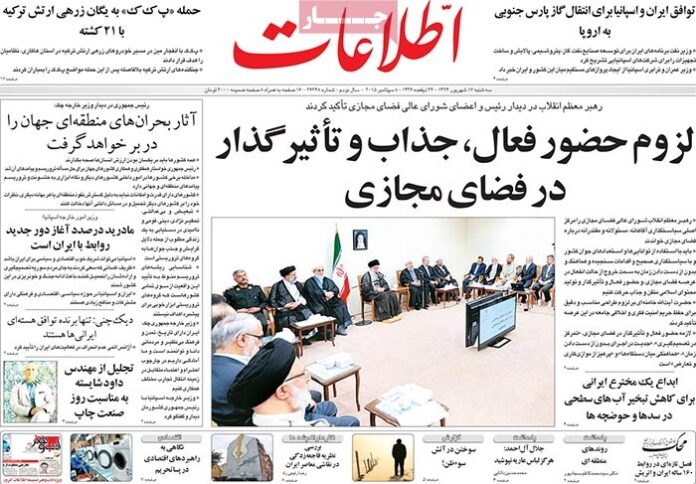 A special look at the headlines Ettela’at newspaper covered on September 8.

♦ At a meeting with members of the Supreme Cyberspace Council, Ayatollah Khamenei underlined the country’s active, impressive and effective presence in cyberspace.

♦ An Iranian inventor has worked out a method to reduce the vaporization of water in dam reservoirs.

♦ Tehran and Madrid have arrived at an agreement on the transfer of the natural gas of Iran’s South Pars field to Europe via Spain.

The Spanish development and transportation minister has said that direct flights between Iran and Spain will be established.

♦ An attack by members of Kurdistan Workers Party (PKK) on a Turkish armored column has left 21 dead.

Immediately after the deadly attack, Turkish warplanes bombed the positions of PKK.

♦ The fallout of regional crises will haunt the whole world, President Rouhani said at a meeting with the Czech foreign minister.

The president also appealed for consultation among world nations in defeating the scourge of terror and its repercussions.

♦ The Spanish foreign minister has said that Madrid seeks to open a new chapter in relations with Tehran.

The top diplomat said that Spain could be a good political and economic partner for Iran.

♦ Former US Vice-President Dick Cheney has said that the Iranians have been the only winner of the nuclear deal.

In another development, the UN nuclear watchdog said that there has no diversion in Iran’s nuclear activities.

♦ At a ceremony to mark Print Day, the services of Davood Shayesteh have been praised.