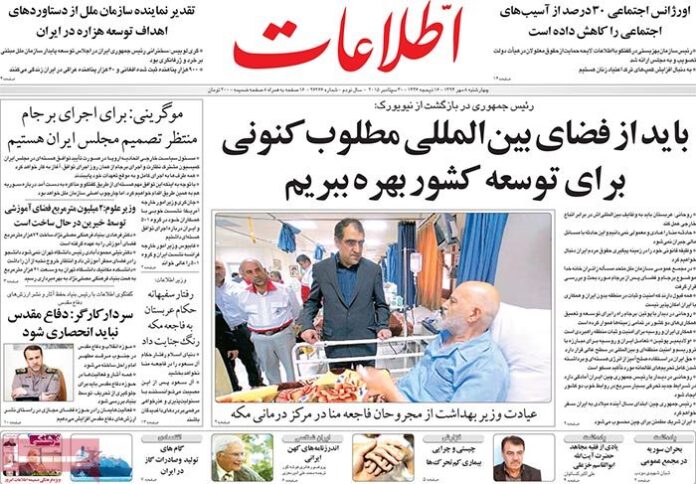 A special look at the headlines Ettela’at newspaper covered on September 30.

♦ “The present good international atmosphere should be seized to develop the country,” President Rouhani said upon return home from New York, where he attended a UN General Assembly session.

♦ Health Minister [Hassan Hashemi] has paid bedside visits in Mecca to those injured in the Hajj tragedy.

♦ Introduction of the Social Emergency Service has seen social harms decline by 30 percent.

The director of the Welfare Organization has said that the bill on the Rights of the Disabled has been approved by the Cabinet and sent to parliament for a final go-ahead.

♦ The UN envoy in Iran has praised Iran’s achievement as far as the Millennium Development Goals are concerned.

UN Resident Coordinator in Iran Gary Lewis further said that the comments of President Rouhani at the UN Sustainable Development Summit were based on wisdom and farsightedness.

♦ EU foreign policy chief Federica Mogherini has said that [P5+1] is awaiting the decision of the Iranian parliament before implementing the Joint Comprehensive Plan of Action.

She further said on the same day the deal secures the blessing of the Iranian parliament, a joint commission to oversee and implement the deal will be launched.

♦ The minister of science has said that benefactors across the nation are building educational facilities on expanses of land totaling 2 million square meters in area.

♦ “The stupid behavior of Saudi officials gave a criminal tinge to the Mecca tragedy,” said the Iranian intelligence minister.

He further said the world of Islam won’t forgive the behavior of the Saudi officials.

♦ “The Sacred Defense should not be monopolized by one single group,” said Brigadier General Kargar, who leads the Foundation for the Preservation and Promotion of the Sacred Defense Values.