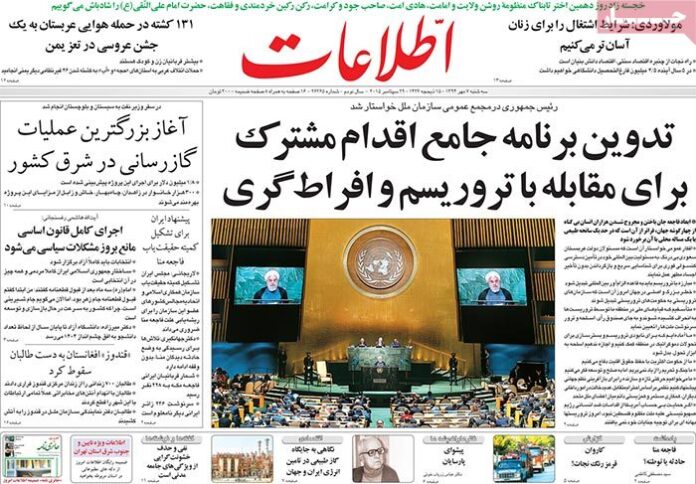 A special look at the headlines Ettela’at newspaper covered on September 29.

♦ In a speech at the UN General Assembly President Rouhani called for a Joint Comprehensive Plan of Action to take on terrorism and extremism.

♦ Shahindokht Molaverdi has vowed to make it easier for women to land jobs.

The vice-president for women’s affairs further said that over the next five years some 4.5 million students will have graduated from universities.

♦ A Saudi airstrike on a wedding ceremony in Taiz, Yemen has left 131 people, most of them women and children, dead.

♦ Ground has been broken on the largest gas supply project in eastern Iran.

The $1.8 million project will take natural gas to 300,000 households in Zahedan, Chabahar, Khash and Zabol.

♦“Compliance to the letter with the Constitution will prevent political problems,” said Ayatollah Akbar Hashemi Rafsanjani.

The chairman of the Expediency Council further said that elections should be free and fair and that the structure of the Islamic Republic of Iran is democratic.

♦ Iran has suggested a fact-finding committee be formed to look into the Mina tragedy.

It came as the number of Iranian pilgrims killed in the stampede rose to 228; another 246 are listed as missing.

♦ Kunduz has fallen to the Taliban who have torched the UN mission in the northern Afghan city.