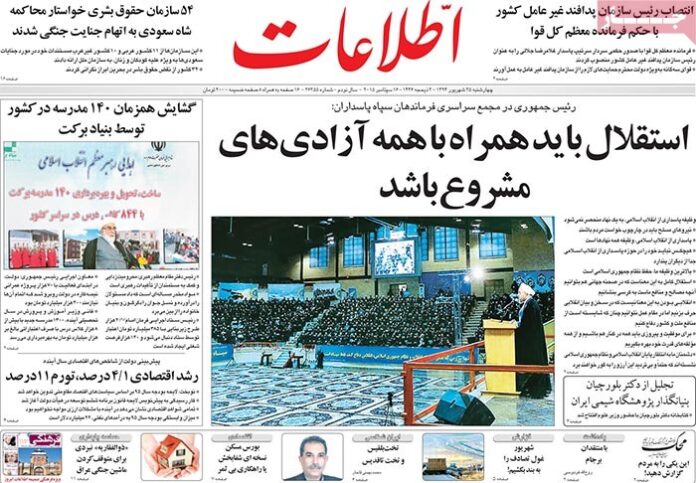 A special look at the headlines Ettela’at newspaper covered on September 16.

♦ “Independence should come with all legitimate freedoms,” President Rouhani said at a gathering of IRGC commanders from across the nation.

♦ The commander in chief of the armed forces has appointed Brigadier General Gholamreza Jalali as chairman of the Passive Defense Organization.

Ayatollah Khamenei has urged the three branches of government, particularly the executive, to support the Passive Defensive Organization.

It came as 32 countries expressed concern over violation of human rights in Bahrain.

The chief of staff of the Supreme Leader has said that Ayatollah Khamenei underlines efforts to eliminate poverty and assist the needy.

♦ The government predicts economic growth to hover around 4.1 percent next year. Inflation is estimated to be in the neighborhood of 11 percent.

The director of the Management and Planning Organization has said that next year’s budget will be drafted based on principles of the resistance-based economy.

♦ The efforts of Dr. Mohammad Bolurchian, the founder of Chemistry Research Center, have been praised.

The minister of science was on hand for the inauguration of a library named after Dr. Bolurchian.