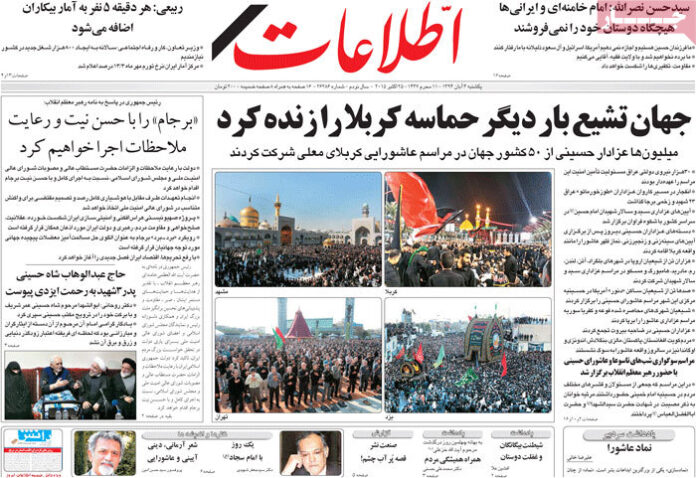 A special look at the headlines Ettela’at newspaper covered on October 25.

♦ The world of Shiism revived the epic of Karbala.

♦ The Hezbollah leader has said that Imam Khamenei and the Iranians will never sell out their friends.

Seyyed Hassan Nasrallah further said, “We are the sons of Hussein and will not let the US, Israel and Al-Saud family humiliate us.”

♦ Ali Rabiei has said that five people are added to the number of the jobless every minute.

The minister of cooperatives, labor, and social welfare further said that the country needs to create 800,000 new jobs each year.

♦ “We will implement the Joint Comprehensive Plan of Action in good faith by taking into account all considerations,” wrote President Rouhani in response to the Supreme Leader’s letter.

The president further said that the government will take into account the Supreme Leader’s remarks and the decisions of the Supreme National Security Council and the Islamic Consultative Assembly in implementing JCPOA fully and in good faith.

♦ Hajj Abdolvahab Shah Hosseini, the father of three martyrs, has passed away.

President Rouhani said [in a condolence message] that the late Shah Hosseini spent his valuable life on promoting Imam Hossein’s school of thought.