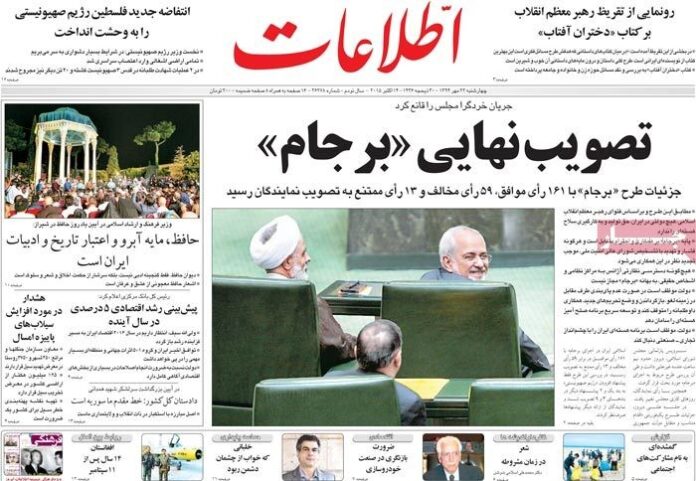 A special look at the headlines Ettela’at newspaper covered on October 14.

♦ The final approval of the Joint Comprehensive Plan of Action

♦ A note by the Supreme Leader in praise of The Daughters of Sun has been unveiled.

In the note, the Leader has hailed the book as “the best by an Iranian author in raising an intellectual question”.

♦ A new Palestinian Intifada has sent panic through the ranks of the Zionists.

We are in very difficult conditions, the Israeli prime minister has admitted.

♦ In a ceremony to mark Hafez Day, the minister of culture and Islamic guidance hailed the renowned 14th century poet as a source of pride for the Iranian history and literature.

♦ The governor of the Central Bank said next year’s economic growth is estimated to stand at five percent.

He further said the recent deal between Iran and P5+1 will have important impacts on a regional and global scale.

♦ The attorney general has said that Syria is the forefront of the battle.

Ebrahim Raeesi made the comment at a service in memory of IRGC’s Brigadier General Hossein Hamedani, who was martyred in Aleppo, Syria last week.