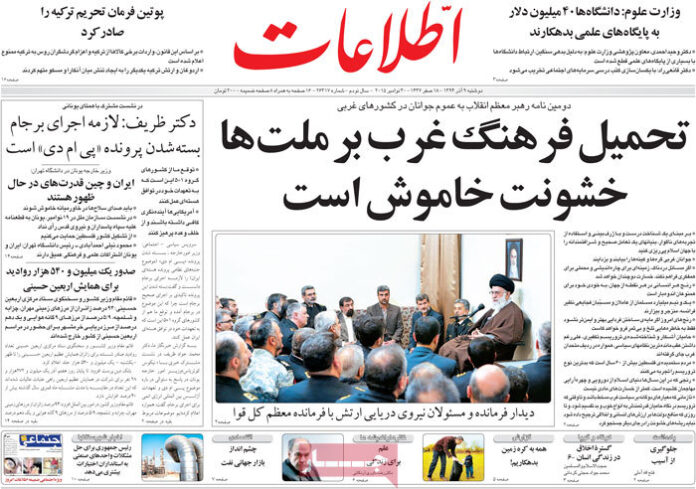 A special look at the headlines Ettela’at newspaper covered on Nov. 30.

♦ Imposition of Western culture on nations is like silent violence, said the Supreme Leader in a second letter to the youth in Western countries.

♦ The Science Ministry has said that universities owe $40 million in debts to scientific centers.

Under the new arrangement, imports of certain items from Turkey and Turkey tours by travel agencies are banned.

♦ Foreign Minister Zarif has said that implementation of the Joint Comprehensive Plan of Action hinges on the closing of the PMD case.

In a joint press conference with his Greek counterpart, the Iranian top diplomat said Tehran expects P5+1 to honor its commitments under the nuclear deal.

♦ In a speech at the University of Tehran, the visiting Greek foreign minister has described Iran and China as emerging powers.

The Greek top diplomat further said that guns in the Middle East should fall silent, and that Athens supports the formation of a Palestinian state.

About 94 percent of the Iranians who are in Iraq for the ceremonies have traveled overland, 5.9 percent by air and 0.1 percent via sea.