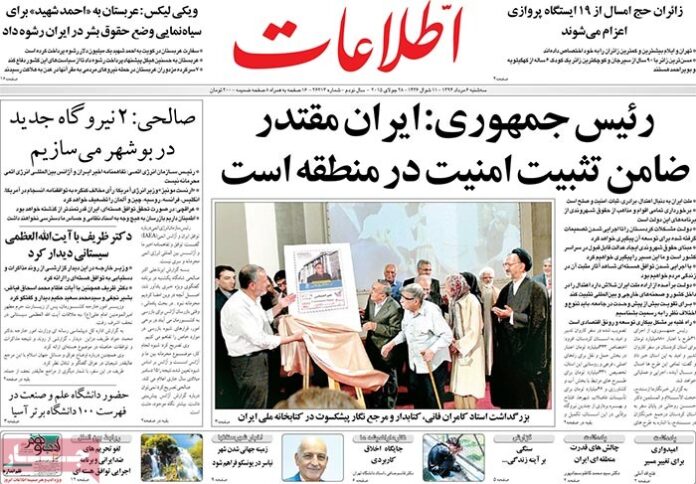 A special look at the headlines Ettela’at newspaper covered on July 28.

♦ “A mighty Iran serves as a guarantor of regional stability and security,” said President Rouhani.

♦ A ceremony has been held to praise the services of Kamran Fani, a veteran librarian with the National Library.

♦ This year, Hajj pilgrims fly to Saudi Arabia from 19 airports across the country.

The oldest Iranian who is to pay the pilgrimage visit is 90, the youngest is six.

The Saudi embassy in Kuwait is said to have paid the UN special rapporteur $1 million in bribes.

♦ “Iran is to build two new power plants in Bushehr,” said the director of the Atomic Energy Organization.

Ali Akbar Salehi further said the agreement Iran has recently signed with the UN nuclear watchdog is not confidential.

At the meeting the issue of Iran’s nuclear deal with P5+1 came up for discussion.

♦ Iran University of Science and Technology has a place on the list of top 100 universities in Asia.