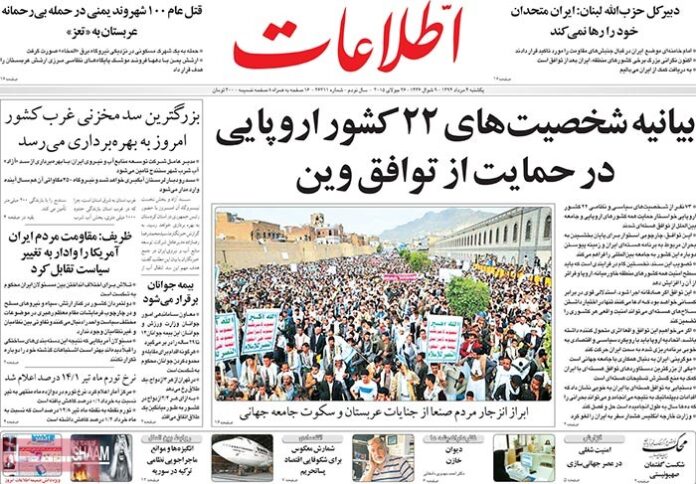 A special look at the headlines Ettela’at newspaper covered on July 26.

♦ Public figures in 22 European countries have issued statements in support of the Vienna deal [between Iran and P5+1].

♦ Residents of Sana’a have expressed indignation over Saudi crimes in Yemen and the silence of the international community.

♦ “Iran won’t leave its allies in the lurch,” said the secretary general of Lebanon’s Hezbollah.

♦ Some 100 Yemeni nationals were massacred in a Saudi attack on Taiz.

Meanwhile, the Yemeni Army rained down scores of missiles on the border posts of the Saudi Army.

♦ The largest reservoir dam in Western Iran will be inaugurated later on Sunday.

The dam will provide drinking water to the Kurdish town of Sanandaj.

♦ “The resistance of the Iranians forced the US to change course,” said Foreign Minister Mohammad Javad Zarif.

The top diplomat further said efforts to sow discord among Iranian officials are doomed to fail.

♦ The youth will be given special insurance coverage.

An official with the Ministry of Youth and Sports has said that the new scheme covers individuals in the 14-29 age brackets.