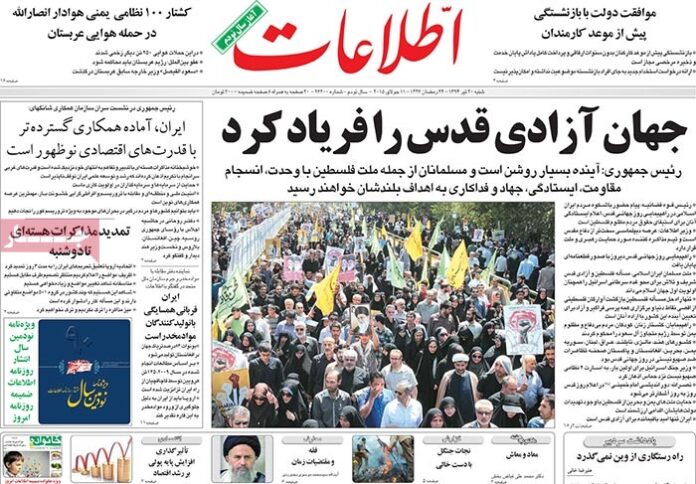 A special look at the headlines Ettela’at newspaper covered on July 11.

♦ The world shouted for the liberation of Quds.

♦ The government has given the green-light to the early retirement of civil servants.

Those who retire early won’t be entitled to full termination of employment benefits.

♦ Some 100 Yemeni military personnel who supported Ansarullah [the Houthis] were killed in a Saudi airstrike.

An additional 250 were injured in the air raid.

♦ “Iran stands ready to expand its cooperation with emerging economies,” said President Rouhani in a speech at a summit of the Shanghai Cooperation Organization in Russia.

“Fortunately, thanks to wisdom and understanding nuclear talks are close to conclusion and Western powers have admitted that Iran’s scientific development is unstoppable,” the president added.

On the sidelines of the summit, the president met with his Russian, Chinese, Afghan, and Belorussian counterparts as well as the Indian prime minister.

♦ “Iran has fallen victim to its proximity to drug producers,” said the UNODC envoy in Iran.

He further said that Europe should appreciate Iran’s efforts to stop the transit of illicit drugs to the green continent.

♦ Nuclear talks between Iran and P5+1 have been extended through Monday (July 13).

The Iranian foreign minister said that Iran has made its stance known and is waiting for the other side to make a decision.

He further said that unfortunately some parties to the talks have changed their stance and are putting forth excessive demands.