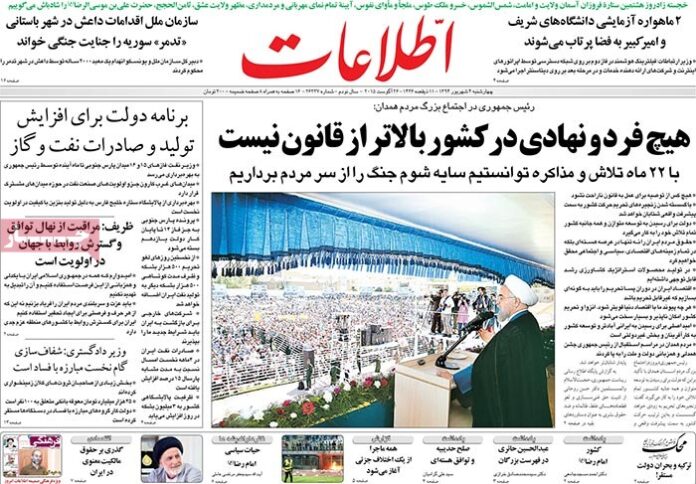 A special look at the headlines Ettela’at newspaper covered on August 26.

♦ “No person or institution is above the law in the country,” said President Hassan Rouhani.

♦ Two experimental satellites developed by Sharif and Amir Kabir universities of technology will be launched.

The minister of communications also said smart filtering will be first introduced by Internet service providers before being implemented at the data center.

♦ The United Nations has denounced as war crimes the measures IS terrorists have taken in the ancient city of Palmyra.

The UN secretary-general and UNESCO have condemned the destruction of a 2,000-year-old temple in the Syrian city.

♦ Government lays out plans to increase the production and exports of oil and natural gas.

The oil minister said that Phases 15 and 16 of South Pars gas field will have been inaugurated by the president by next month.

♦ “Attending to the sapling of the [nuclear] deal and expanding ties with the rest of the world are our priorities,” said Foreign Minister Mohammad Javad Zarif.

He further said he hopes everyone in the Islamic Republic of Iran seizes the opportunity [the nuclear deal presents] rather than turning it into a threat.