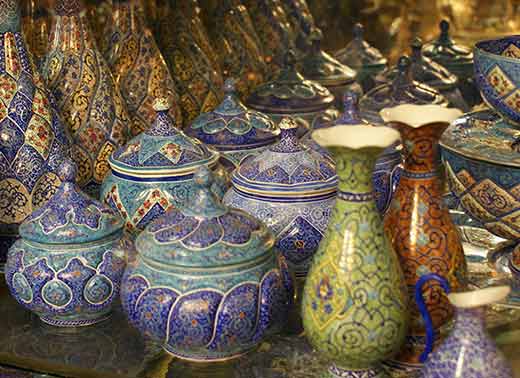 Handicrafts are independent products which are inspired by an artisan’s thought, creativity, and performance. It can be considered as one of axes of resistance economy by providing sustainable employment opportunity.

According to art experts, Iran ranks among the top three countries in the world for handicraft activities. Researchers and art lovers consider Iran as the birthplace of handicrafts and arts such as carpet, metalwork, and potteries and ceramics, according to IRNA.

Iranian handicrafts can be studied from artistic and economic aspects.

The artistic aspect is of high importance because it involves Iranian-Islamic values and culture, and relies on Iranian tastes, dynamism, thinking and creativity.

From the economic point of view, handicrafts should have a higher standing for exports to global markets, increase non-oil revenues, and play a great role in the country’s economic and social development.

One of the major concerns of officials in the handicrafts sector is the modesty of artisans. They have insurance problems.

Furthermore, presence of exporters from rival countries, which have copied Iranian designs and made products similar to Iranian ones, is another bitter reality. Despite the rapid development of the industry coupled with the onset of modern technology, handicraft is still considered central to Iranian culture and art.

If it is applied as a consuming commodity by Iranian families, it could have a promising future.

Head of Iran Cultural Heritage, Handicrafts, and Tourism Organization (ICHHTO) contends that the organization has a special role in country’s economic and cultural development during the current Iranian year which has been designated by Leader of Islamic Revolution Ayatollah Seyyed Ali Khamenei as the ‘Year of Economy and Culture With National Determination and Jihadi Management’.

Massoud Soltanifar added that out of 460 fields of handicraft, 352 are active in Iran.

Followed by India and China, Iran is considered as third handicrafts hub worldwide, he pointed out. Some two million people are involved in the handicrafts sector, he added.

“Some two million square meters of carpets are woven annually in Iran, of which 1.5 million are exported.”
Soltanifar said the country earned $150 million by exporting handicraft items in the last Iranian year (ended March 20, 2014).

It also fetched $1 billion from the export of 1.5 million square meters of hand-woven carpets during the mentioned period, he added.

ICHHTO can generate 300,000 jobs in the handicrafts sector once bank loans and financial resources are made available, he said.

Also, director general of Markazi Cultural Heritage, Handicrafts and Tourism Department, said ascertaining the preferences of customers and upgrading the quality of the products are the top priorities of the department.
Seyyed Mohammad Hosseini added that promoting home-based jobs could help remove unemployment.

Based on assessments, over 7,920 people are involved in various handicraft fields in the province, of whom 2,320 have been insured, he said.