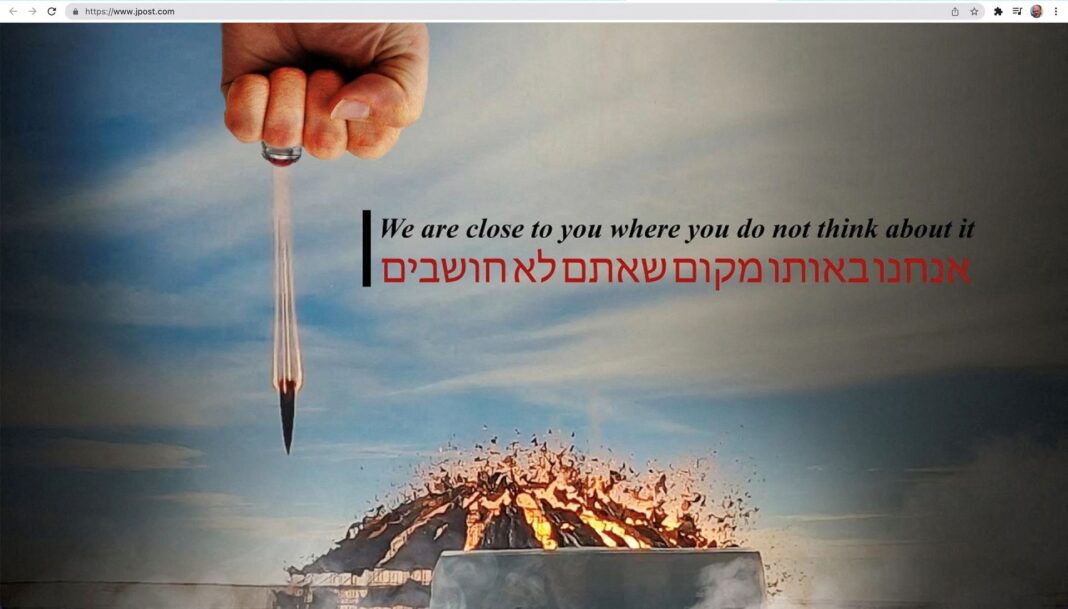 Israeli media outlets Maariv Online and The Jerusalem Post were hit with a cyberattack early Monday. The attack occurred on the second anniversary of the US-assassination of Iran’s top anti-terror commander Lieutenant General Qassem Soleimani.

Reports of the hack began trickling in online just after midnight in Israel, with social media posts first indicating that the Maariv Online had had its Twitter account compromised. Initially, it appeared that three posts had been shared on the account, two of which included images of an explosion and a third including depictions of prominent regional figures Gen. Soleimani and Abu Mahdi al-Muhandis.

The image depicting an explosion appears to be an altered photo pulled from earlier video footage that appeared to show an Iranian strike against a mock-up of Israel’s Dimona nuclear facility.

Unlike the original video content, the photo depicts a projectile being ejected from a ring being worn by an unidentified figure. Alongside the depiction is a phrase that reads: “We are close to you where you don’t think about it.”

Speculation suggests that figure in the photo is meant to be Soleimani, as the ring shown is similar to one worn by him.

The strike against Maariv Online did not affect the outlet’s homepage, but the same could not be said for fellow Israeli outlet The Jerusalem Post.

As reports emerged of the hacking of Maariv Online, the Post’s website appeared to have troubles loading content before eventually giving users a 404 error message. Moments afterward, the same explosive image that first made an appearance on Maariv Online took centerstage on the Post’s homepage.

While Maariv Online has not tweeted a statement on the events, The Jerusalem Post tweeted they were aware of the situation.

“We are aware of the apparent hacking of our website, alongside a direct threat of Israel,” reads their tweet.

“We are working to resolve the issue & thank readers for your patience and understanding. For now, you can continue reading us on our app,” it added.

The tweets have since been deleted from Maariv Online’s Twitter account. As for The Jerusalem Post, their front page remained inaccessible for about two hours before the site’s homepage was successfully returned.