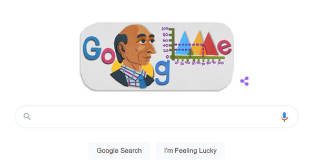 Google has changed its logo in tribute to famous scientist and mathematician Lotfi Aliasker Zadeh who was of Iranian descent.

Aliasker Zadeh was born in Baku, Azerbaijan, on February 4, 1921, while his father, a journalist, was on assignment there from Iran. In 1931, at age 10, Askar Zadeh and his family moved back to Tehran, Iran.

While attending school in the Iranian capital, Askar Zadeh earned a degree in electrical engineering from the University of Tehran and later moved to the United States with his wife.

Askar Zadeh’s greatest contribution to computer science came in the form of a paper called “Fuzzy Sets”. In the “Fuzzy Sets” paper, and the ensuing field of “fuzzy mathematics,” Askar Zadeh shows the usefulness of the infinite number of decimal places between 0 and 1.

As for why Google chose today to celebrate Askar Zadeh, the “Fuzzy Sets” paper was first submitted on November 30, 1964, and was ultimately published in 1965.

Askar Zadeh died in Berkeley, California, in 2017 and was buried in his birthplace.