French Artist’s Exhibition in Iran; Journey from Words to Drawings 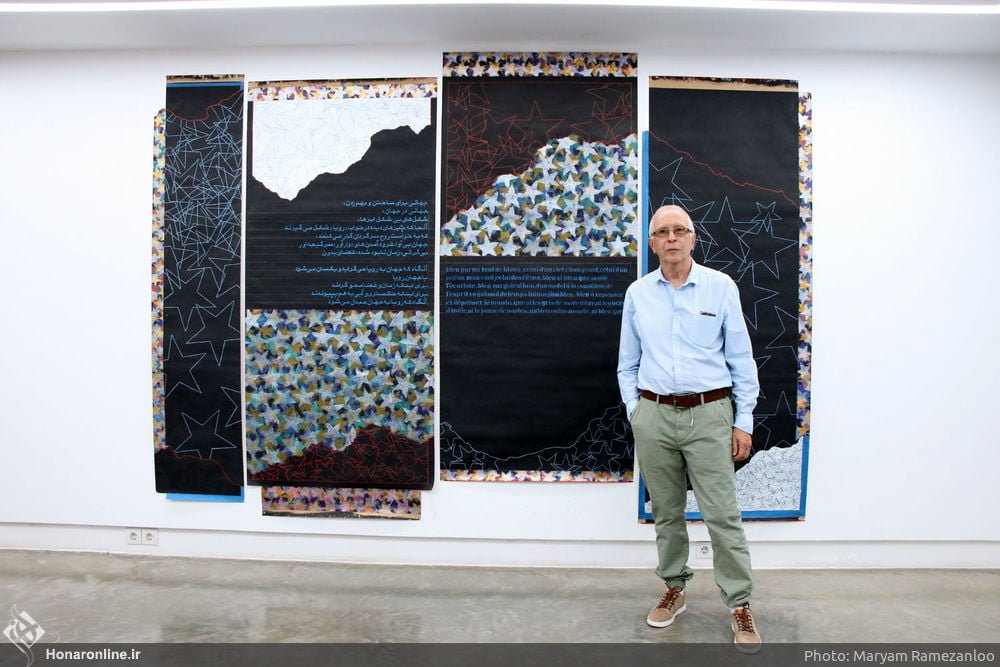 Saless Gallery in Tehran recently hosted an exhibition of drawings by French artist Jean-Pierre Brigaudiot, entitled “A Blue as Blue as the Scarlet”.

His exhibition was a combination of his poems in French and graphic works. Poems play a key role in his pieces and he seems to have created the drawings solely to add to the beauty of his poems or offer a new interpretation of them.

Brigaudiot had earlier held a number of exhibitions in Iran. As in his previous exhibitions, the artist focused on the connection between poems and paintings in his new exhibition.  His paintings are made of a simple element: pentagons drawn usually with blue and red lines on the paper. Their combination in each piece creates various atmospheres.

The stars’ short and long distances from each other have created new combinations in each work. In some areas, some additional colours are included, causing some colourful variations. Despite their simplicity, the pieces highly resemble the Iranian paintings and architecture by their geometric shapes. Mirrors, tiles and other elements used geometrically in the French artist’s pieces to create polygon stars have a familiar ring for the Iranian visitors.

Another significant element in Brigaudiot’s exhibition is his poems. In most of his works, there is a sentence or a text in French or translated in Persian. The poems are not used as graphic elements. They are included in the paintings mostly with a simple layout. Interestingly, the artist doesn’t make any graphical creation with the poems. Therefore, as it seems, Brigaudiot is seeking to remind his visitors of a certain relation between the texts and the paintings.

Poems have a key role in the works of the French artist and as things stand, the artist uses them as an element to make his works seem more beautiful or offer a new interpretation of his poems. While the drawings can be viewed as a poem collection, they also preserve their independent identity as an artistic form deserving an in-depth study.

The following photos of the exhibition were first released by Honar Online: