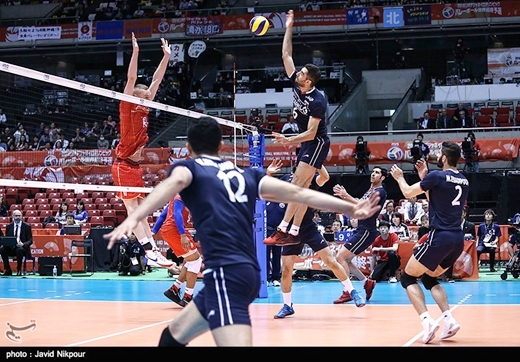 France defeated Iran in straight sets (25-20, 25-18, 25-22) at the Men’s World Olympic Qualification Tournament at the Tokyo Metropolitan Gymnasium on Tuesday May 31.

France took advantage of the absence of Iran’s talsimanic Amir Ghafour, and was able to set up a wall blocking the other Iranian hitters, Tasnim reported.

Iran looked completely different without their main opposite spiker Ghafour, as Shahram Mahmoudi and Milad Ebadipour were forced to run the offence with minimal support from their teammates.

Mahmoudi topped all scorers with 19 points. Ebadipour chipped in 14 points on a losing effort for Iran.

Iran will face Japan on Wednesday.

Eight strong teams are competing at the Men’s Olympic Qualification Tournament from May 28 to June 5 at the Tokyo Metropolitan Gymnasium.

IFP: As reported by KhabarOnline,12 years ago, the French national team defeated Iran in the Olympic qualifiers and prevented Iran from booking a ticket to Athens.

Now, even though Iran has become one of the world’s major volleyball powers, France once again managed to triumph. Iran has never achieved a victory over the French.