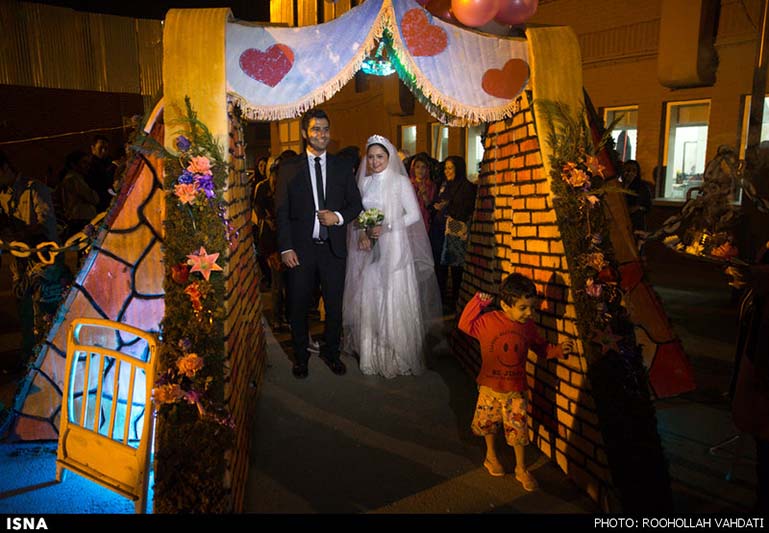 Humans should be committed to lofty human objectives and should empathize with those who have been subjected to social harms, the bride said.

In Tehran, a young couple has celebrated its wedding with rehabilitated women attending as guests.

What comes next is a report alef.ir filed on October 13 about the initiative the young couple took to cheer up those who had long forgotten what it was like to be happy:

Every single person is entitled to be happy, and being part of joyful occasions is a psychological need. That was the reason behind the decision of a young couple in Tehran to celebrate the beginning of their married life alongside a number of rehabilitated women who used to sleep rough.

Atiyeh, the 28-year-old bride, and her husband, Mehdi, agreed to invite to their wedding those who had not attended a party for years.

She says, “When a girl is denied the safe and reliable shelter of a family, she thinks that all her wishes are gone and always carries with herself profound, old regrets. That’s why my husband and I decided to give a gift to no-longer homeless women who had kicked their drug habit with the help of a charity. Our guests at the wedding party were the ones who were sober for months or even years.”

Humans should be committed to lofty human objectives and should empathize with those who have been subjected to social harms, she said.

Atiyeh added, “My parents and husband live among ordinary people and can relate to them. So they did not oppose the idea of celebrating the wedding with rehabilitated women and children. People like them may have never experienced having a family. That’s why we decided to share the happiest night of our lives instead of with our own families with those who were denied a home and family. That was meant to alleviate their suffering.”

The following are images of the wedding the news website has released: