Foolad of Ahvaz clinched the title of the Iran Professional League (IPL) on Friday.

On the final day of the season, Foolad defeated Gostaresh Foolad of Tabriz 1-0 in Tabriz. Mehrdad Jamaati scored the goal for Foolad in the 37th minute.

Persepolis became runner-up and qualified for the next season’s AFC Champions League along with Foolad. The Iranian giant football team beat Esteghlal Khuzestan 1-0 in its away game. Prodigy Mohammad Abbaszadeh found the back of the net from the penalty spot in the 32nd minute.

Meanwhile, Naft lost to Sepahan and finished in third place. Mehdi Sharifi was on target in the 53rd minute. Naft will go to playoffs to book a place in the AFC Champions League. Sepahan finished in fourth place.

Farshad Ahmadzadeh opened the scoring in the 31st minute but Esteghlal defender Hanif Omranzadeh cancelled out his goal in the 43rd minute.

Afterwards, Mohammad Nosrati gave a lead the visiting team with a long-range shot in the 52nd minute. Tractor Sazi striker Karim Ansarifard scored from the penalty spot in the 72nd minute and became the best scorer of the season with 14 goals.

Damash was relegated from IPL after a 1-1 draw against Mes, which had been relegated last week.

Foold won the IPL title for the second time. The Ahvaz-based team had once won the title in 2004-05 Season. 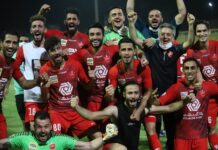