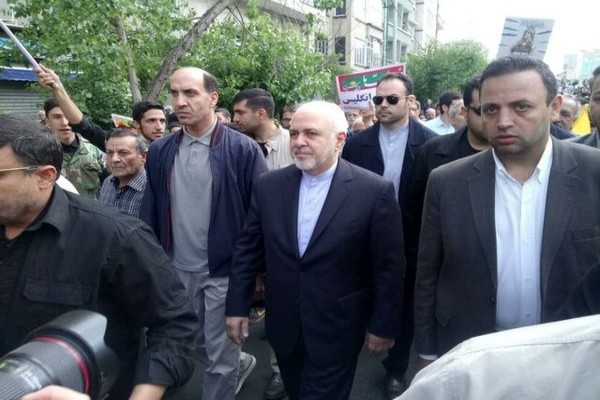 Iranian Foreign Minister Mohammad Javad Zarif says the holy al-Quds is not up for sale, and nobody has the right to cede the first Qibla of Muslim world.

Zarif made the remarks in a tweet he posted in Arabic on Friday.

“Unfortunately, a few Arab rulers believe that if they follow [Israeli Prime Minister Benjamin] Netanyahu, they’ll be able to achieve their illusions,” he said.

“But Netanyahu has failed to protect Israel, despite his Iron Dome, so how can he protect THEM?” Zarif asked.

Earlier in the day, Zarif attended massive rallies held across Iran and in other parts of the world to mark the International Quds Day.

Zarif said the message of the rallies is that al-Quds is not for sale.

“Al-Quds is not for the US to be gifted to Israel, and Tel Aviv cannot have any claim over the city, either,” he added.

“Today Muslim people in all parts of the world have gathered to mark the Quds Day. No one is allowed to sell al-Quds on behalf of Muslims,” Zarif said.

Zarif was referring to a so-called peace plan by US President Donald Trump, known as the “Deal of the Century”, which is to be revealed at an undetermined date sometime after the Israeli parliamentary elections.

Since Trump took office a trio composed of his son-in-law Jared Kushner, Jason Greenblatt, long-time confidant and chief legal officer to Trump’s business empire, and US Ambassador to Israel David Fried-man have been working on such a plan.

Kushner and Greenblatt on Thursday met Israeli Prime Minister Benjamin Netanyahu in Jerusalem al-Quds “to drum up support for an economic conference in Bahrain next month,” Reuters reported.

The Trump administration seeks to use the Bahrain meeting to unveil the “economic stage” of his so-called Deal of the Century.

The United States has kept the plan under wraps.

Leaked information, however, indicate that it features serious violations of the Palestinian’s age-old demands.