Final steps in nuclear talks are being taken: Prayer leader 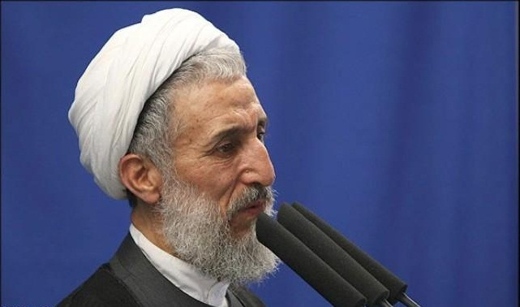 The provisional Friday Prayers Imam of Tehran brought up the “final steps toward a comprehensive nuclear agreement” with six world powers and appreciated the wise management of the negotiations by President Hassan Rouhani.

Hojjatoleslam Kazem Seddiqi also thanked President Rouhani for expressing clear and precise stands about the Iranian nuclear program and the nuclear negotiations during his recent visit of the holy Qom City.

“We thank Almighty God that the esteemed president in Qom and during his meetings with the prominent clerics in that city… declared clear and promising stands and announced that Iran will not yield to humiliation, a shutdown (of nuclear facilities) or continuation of the sanctions,’ said Seddiqi addressing thousands of worshippers.

He said that His Eminence the Leader of Revolution in his last address about the nuclear negotiations stated that the Westerners are used to lengthy bargaining, a case in point for 60 years Palestine has been occupied by the usurper Zionist regime, but they are still negotiating while Israel is destroying Palestinian infrastructure and those useless talks keep going on and on and on.

“His Eminence added that if that is going to be the case, we insist that the main points and the minute details need to be resolved all together; but they intend to keep the sanctions in effect and block the path for our country’s progress and prosperity, which is not acceptable as all sanctions need to be lifted and annulled together,” he said.

Seddiqi reiterated that the Westerners are not allowed to interfere in Iran’s internal affairs; neither are they allowed to define the quantity of the fuel that we can produce.

“Such blackmailing was a characteristic of the colonial era, not the Islamic Revolution’s period in which Iran is conquering the peaks of scientific progress,” he stressed.

Hojjatoleslam Seddiqi added that Arak Heavy Water Reactor must be activated; Fordo needs to continue its activities and the extent of enrichment must not be restricted as these are our people’s demands and they will not be content getting anything less.