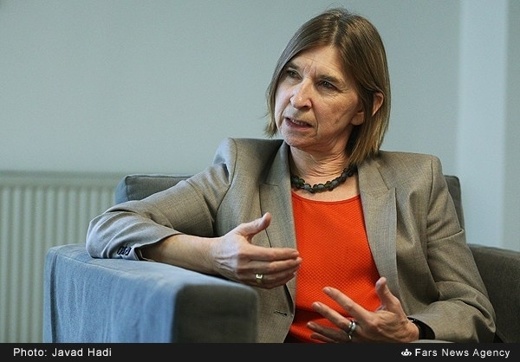 Iran is a fascinating country; the Iranian people are extremely friendly and hospitable and such matters help me feel at home in Iran, said the Norwegian ambassador to Iran.

Norwegian Ambassador to Iran Aud Lise Norheim has described the Iranians as friendly people, saying she feels good when she spends time in Iranian gatherings and the fact that she is the only female foreign ambassador in Iran is her only problem. Expressing hope that other countries will send female ambassadors to Iran, she says, “I feel extremely comfortable and totally safe here, and as a woman I have not faced any problems in communicating with Iranian officials.”

The following is the translation of what Fars News Agency said in the lead of an interview with the Norwegian diplomat it published on January 18:

On October 27, she presented her credentials as Norway’s first female ambassador to Iran to President Hassan Rouhani. Aud Lise Norheim, who served as Norwegian ambassador to Lebanon and Bangladesh and was in charge of the UN department at Norway’s Foreign Ministry before she took the helm of the Norwegian embassy in Tehran, does not think of herself as a politician and says she is an ordinary staff member and likes it in Iran.

The 58-year-old ambassador who is in Tehran with her husband has two sons aged 26 and 31. She misses her infant grandchild even more than her sons.

Her mission to Iran has already taken her to the cities of Kerman, Yazd and Kashan. She is interested in visiting other cities across Iran.

The Norwegian diplomat, who had visited Iran twice before she took the job offer to become Oslo’s ambassador to Iran, says she took up the job offer immediately after it was made.

Recalling Iran’s influence and position in the Middle East, she described her presence in Iran as a great opportunity which enables her to look at the Middle East from an Iranian vantage point.

Ms. Norheim, who is immensely enthusiastic about Iran’s culture, said, “I like Iranian concerts as well as Iranian plays; I am also interested in Iran’s strong film industry.”

The Norwegian diplomat said that she takes great pleasure in reading Persian literature and advised foreigners to visit Iran.

“Iran is a country one needs to visit in order to see in person what they have heard about it. In terms of history and culture, it is a fascinating country; the Iranian people are extremely friendly and hospitable and these matters help me feel at home in Iran,” she said.

Among other matters, the lifting of sanctions, readiness of Norwegian firms to invest in Iran, the state of Iranian university students in Norway, terrorism, extremism and the presence of some Norwegian nationals in IS ranks were brought up during the interview.

She added, “The visit was the first state visit by a Norwegian foreign minister to Iran in 12 years and such meetings reflect the willingness of both sides to boost their political ties.”