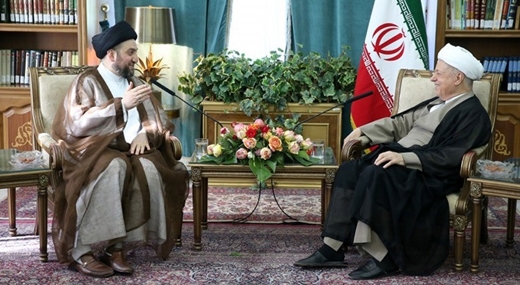 The implementation of a moderate approach in a society which has suffered from dictatorship for decades and the scourge of terrorist groups is an uphill task, said Ammar Hakim.

Beating the drum of war among followers of different Islamic schools of thought and other religious minorities in Iraq is a plot hatched by the enemies of Islam, said Chairman of Expediency Council Ayatollah Akbar Hashemi Rafsanjani Tuesday.

“The prominent religious scholars, leaders of political groups and parties, and even heads of tribes in Iraq are expected to promote harmony, cooperation and solidarity in their words and their deeds,” said Ayatollah Rafsanjani at a meeting with Seyyed Ammar Hakim, the chairman of the Islamic Supreme Council of Iraq.

Stressing the immense importance of Iraq’s strategic position and rich resources, he said that Iraq has potential for both positive and negative developments in political and economic fields.

“If the central Iraqi government manages to strengthen the security index in that country, the outcomes of the development will benefit the entire region,” he added.

Hakim, for his part, said that the implementation of a moderate approach in a society which has suffered from dictatorship for decades and the scourge of terrorist groups is a very tough task.

“One of the factors for backwardness of such societies is that the people are not in harmony with the political groups,” he added.

On the latest status of the IS terrorists in Iraq, he said that with the vast mobilization of the popular forces in the war against terrorism, the retreat of IS from Iraq is gradually accelerating, adding that the terrorists are no longer capable of recruiting forces even from the Iraqi Sunni Muslims.

“The crimes those terrorists have committed against people, particularly women and children, and even Sunni Muslims have created hate among the Iraqi nation for the terrorist group,” he said.