“Everything Possible, Even another War in Strait of Hormuz” 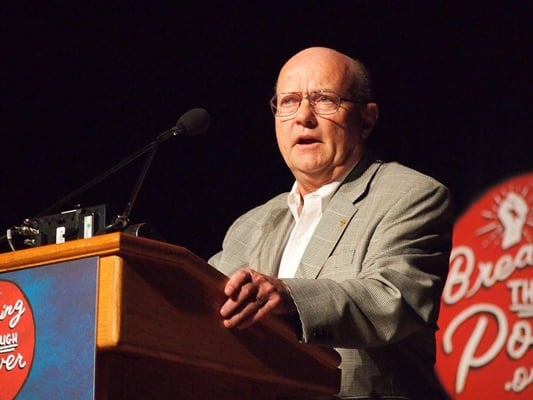 A former US official says an American war against Iran is likely at this point in time, and that it would be naïve to think Washington would never do that.

Lawrence Wilkerson, the chief of staff of former US Secretary of State Colin Powell, made the comment in an interview with the Al Mayadeen news network.

On Syria, he noted that Syrian President Bashar Assad has emerged victorious, and this is something that Washington and Tel Aviv both acknowledge. He said Assad has secured victory and will remain in power, and now Trump and Putin will only discuss cooperation to rebuild Syria and help restore stability to the Arab country.

He further weighed in on comments by US National Security Advisor John Bolton and others who say the problem is not Syria, but is Iran. Wilkerson said people like John Bolton have no other option but to make such remarks. He said they wanted to see the fall of Syria and Assad, and their second objective was Iraq, but they failed, and now they have focused their attention on Iran.

Wilkerson said they believe the only way to engage with 75 million Iranians is to attack the country. However, he added, such a move will be a disaster 10 times worse than the war on Iraq.

According to Wilkerson, remarks by Bolton and others about containing Iran in Syria means that the Israelis and Americans will tell Assad through diplomatic channels that Iran and Hezbollah should leave Syria. Wilkerson said he believes they put pressure on Iran through Syria and that they are likely to succeed. He says Moscow will also be ready to send Iran some messages at the beginning. He said if Iran is a major power in Syria, it will not be in Moscow’s interest. However, he added, Putin knows the game of chess well enough. Wilkerson said he believes Tehran-Moscow relations are not cordial ones, but a relationship based on interests.

The chief of staff to the former secretary of state also weighed in on Trump’s policy vis-à-vis Iran. He said he was cognizant of what was going on in US Congress. Wilkerson said what worries him is that if US lawmakers move toward adopting a law on bringing about a regime change in Iran like what they did in 1998, it will be regarded as the official position of Washington. That is the same thing they did to Iraq, he added. According to Wilkerson, US legislators will finally pass such a law in eighteen months’ time.

In this interview, he weighed in on the reasons behind the US invasion of Iraq, saying the reason for the attack on Iraq was oil. He said Washington’s strategic objective was to make sure that the crude oil transferred via the Strait of Hormuz, i.e. a third of the world’s petroleum, kept being transferred at a steady rate and a good price.

Elsewhere in his remarks, Wilkerson referred to Washington-Moscow relations, saying the United States and Russia should sit down for talks.

He made the comment while referring to a meeting between US President Donald Trump and his Russian counterpart Vladimir Putin in Finland on July 16.

Elsewhere in his remarks, Wilkerson expressed his opinion on the extent to which the Trump administration is influenced by the Israeli regime. He said Tel Aviv’s influence on Washington has increased a lot, for example financially, through the wealth of people like Paul Singer, bin Salman and others at the [Persian] Gulf Cooperation Council who seek to depict an evil picture of Iran and create the impression that Iran disrupts regional stability. He said Saudi Arabia uses its money to delineate the United States’ policies in the Middle East. He underlined bin Salman’s trip to the US was a campaign not only to convince people that the war on Yemen is useful, but to persuade them that the severance of ties with Qatar would be beneficial as well. Bin Salman also wanted to convince people that Iran is the number-one enemy not only in the region, but in the whole world. According to Wilkerson, the US Defense Department issued a report which reinforces Washington’s support for Saudi Arabia and the United Arab Emirates in the war on Yemen. He said the US keeps supporting Riyadh because of money. He noted that Trump has adopted a business-like approach and when he sees that Saudi Arabia, Qatar and the United Arab Emirates purchase billions of dollars’ worth of American weapons, he needs to return their favour. Wilkerson added the amount of the Saudi investment in the United States is important as well, adding Saudi money is deposited in American and European banks as well and everything revolves around money.