Europe’s willingness to cooperate with Iran on regional matters 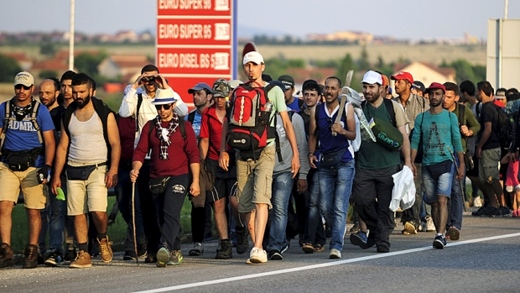 A former Iranian diplomat has said that the Syrian refugee crisis and Russia’s military war games off the coast of Syria have caused the Europeans to turn to Iran for solving regional crises.

An Iranian expert says that the flow of Syrian migrants into Europe has prompted the Europeans to enter into partnership with the Islamic Republic of Iran to solve regional crises, especially the Syrian conflict.

That comment by Sabah Zanganeh, a former Iranian diplomat and a political analyst, came after European officials, including the British and French top diplomats, in recent days highlighted the need for cooperation with Iran to resolve regional crises. The comments of German Foreign Minister Frank-Walter Steinmeier on Friday that settlement of regional crises would be a nonstarter in Iran’s absence are also proof of Europe’s new Iran policy.

Steinmeier’s remarks were echoed by UN Special Envoy in Syria Staffan de Mistura who told the Wall Street Journal on Friday that the Syrian crisis will not come to a halt without Iran’s help. [The failure of Iran and Saudi Arabia to hold candid discussions on the conflict in Syria is a key obstacle hampering a serious push for peace, the United Nations’ special envoy said, warning that a comprehensive political solution is urgently needed to prevent further loss of life and stem Islamic State advances in the region.]

Earlier when international efforts to end the Syrian crisis and other regional conflicts were in full swing, Western countries showed no interest in involving the Islamic Republic Iran in efforts to hammer out a solution to this crisis.

Fararu.com, a news website, on September 13 published an interview with Sabah Zanganeh on Europe’s willingness to cooperate with Iran on regional issues. The following is the translation of part of his remarks in the interview:

Apparently Western countries have realized the depth of the crisis which is unfolding in Syria after the exodus of the Syrian refugees toward Europe’s borders.

Europe is still in dire straits. A staggering number of migrants who have headed toward European countries have caused authorities to go to great lengths to address the root causes of the migration crisis, albeit partially.

To date, the Europeans have tried to hold meetings for the Syrian opposition groups, work with other countries to ratchet up the conflict in Syria against the central government by shipping ammunition from France, Britain and Germany to the Turkish border, and arm terrorist groups.

Europe has not had a constructive role in UN mediation efforts in Syria and has shown no seriousness in cooperating with UN envoys in the country, including Kofi Annan, Lakhdar Brahimi and now Staffan de Mistura. The Europeans had a mostly marginal role and collaborated with the countries which caused the Syrian crisis. Now that the Europeans are facing an [escalating] migrant crisis, they are thinking about changing their Syria approach.

Thanks to the role the United States and Saudi Arabia played in international efforts to resolve the Syrian crisis, Iran was not invited to those UN initiatives. Following the inconclusiveness of the Geneva-I and Geneva-II conferences on Syria, the Europeans have woken up to the fact that Iran is the only country in the region which can play a positive role in this regard. That’s why they are thinking about establishing cooperation with Iran.

Russia’s decision to play a more serious part in the Syrian crisis has contributed to Europe’s new approach. Last week Russia sent warships to the Syrian coast and stationed about 200 [naval infantry] forces on Syrian soil. This raised concerns among European countries and caused them to rethink their approach and insist on a speedy settlement of the Syrian crisis.

These two alarming developments [the Syrian migration crisis and Russia’s military drills on Syrian shores] have caused the Europeans to take a different look at the Islamic Republic of Iran. To them, Iran which is the pivot of regional security and stability has always rejected the use of force, foreign interference and military action to bring about regime change [in the crisis-hit countries]; Iran has good relations with both Syria and Russia.

The fact that European countries have been affected by the flames of the mounting crisis in Syria has prompted officials in these countries to do a simple calculation and come to realize – more seriously than before – that the role the Islamic Republic of Iran can play in the settlement of the Syrian crisis is prominent.