“Europe Resisting US Pressure to Protect Own Interests, Not Iran’s” 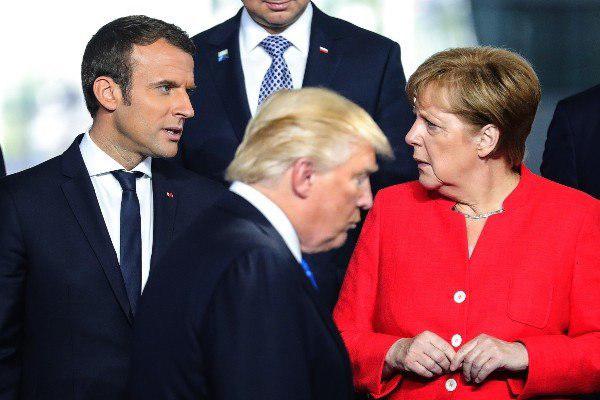 A senior political analyst says Europe’s resistance against Washington’s pressure is aimed at safeguarding its own interests, not those of Iran.

Twenty days on since US President Donald Trump announced Washington’s withdrawal from the Iran nuclear deal, reactions to, and analyses on the unexpected move continue to pour in. Some say companies will not invest in Iran fearing penalties by the United States, and some hold a different opinion.

Political commentator Hossein Valeh has, in an interview with Khabar Online news website, weighed in on the consequences of the United States’ pullout from the Iran nuclear deal as well as the prospects of Tehran-Washington relations.

He says Washington’s new sanctions run counter to the UN Security Council resolution. The analyst believes countries will sue the US for the repercussions of the sanctions on their companies or banks, and may even take part of Washington’s assets in Europe to indemnify their citizens, companies and governments.

The first part of the interview follows.

Some analysts and politicians say Europe may give Iran some promises in word, but it would be impossible to fulfill the pledges, and even small companies cannot forgo the profits they make via the US and cannot ignore Trump’s threats. That being said, is holding talks with Europe futile?

There are two viewpoints about the US and Europe’s positions on issues related to Iran, including the JCPOA. Based on one view, the US and Europe are both tarred with the same brush and both play the good-cop bad-cop game. The same opinion applies to the US government: All American parties and political groups are, in fact, one single current with a certain number of objectives.

Naturally, the advocates of this view are concerned that the West has planned to eliminate Iran in four phases: First, imposing deadly sanctions to bring Iran to the negotiating table; second, giving hollow promises about the JCPOA to remove fears and persuade Iran not to go on the defensive; third, violating the JCPOA in order to ratchet up the pressure on Iran and make it give more concessions in the future talks, and fourth, dealing the final blow under the table and triggering a direct or indirect military confrontation after undermining Iran’s power in a bid to topple the government or disintegrate the country. Now, it begs the question whether Europe will live up to its commitment or will breach it as the US did? If there are no assurances in that regard, is there any use holding negotiations with Europe?

The second group believes the world is really marked by plurality. Europe and the United States have quite different interests, issues and approaches. They have some cooperation while having conflict of interests. The US, itself, is not homogeneous, either. There are both hawks and doves in the US with disparate ideologies, policies, histories and power bases. Today, the geographical borders of the Westphalian nation-state system have been superseded by the supranational interests system and transnational alliances. In the new system, the conflict of interests between major powers creates rifts between them which gives semi-major powers some breathing room.

In the second viewpoint, Europe’s resistance against Washington’s pressure is aimed at safeguarding its own interests, not Iran’s. Europe has put up such resistance before. We can mention the Cuba case as an example. We should be able to take advantage of rifts among major powers. It would be wrong to think we can pit big powers against one another for the sake of our interests. As a result, we should have realistic expectations. Iran once reached agreement with the European Troika, but Bush junior prevented the deal from going into effect. The current agreement (the JCPOA) is different from the previous deal in that the JCPOA is an international agreement and approved by the UN Security Council, which shows all signatories have common interests under the deal. However, the previous agreement was not like that. Therefore, the idea that Europe is making promises just in order to please us would be an illusion resulting from a lack of understanding the nature of relations between international powers. The point is that part of the ruling elite in the US that, from the outset, was against engaging with Iran, including working with Tehran under the JCPOA, has now come to power and tries to impose its will on others. The other part of the US government is resisting this imposition of ideas. The degree of their resistance and success depends on numerous factors, but this is the right way.

If negotiations with the West break down, should we look to the East, again? Putin said in his recent remarks that the annulment of the JCPOA would have adverse repercussions. What does he mean? What options does Moscow have on the table if the JCPOA is scrapped?

The geopolitical landscape has become very complicated. Under such circumstances, the Russians, Europeans and Americans really need Iran, and it is due the geopolitical status. Washington is pressuring Iran to make the country succumb to its demands. The US pressure is partly driven by the favourable situation in the region which emanates from the animosity between countries in the south and north of the Persian Gulf as well as Israel’s acts of sedition. The Europeans need Iran for energy and security. They also need Iran to maintain the balance of power among traditional heavyweights. An Iran which is totally dependent on the US or Russia would limit Europe’s manoeuvering power in the face of Washington. For Russians, Iran is a gemstone which has finally got out of their rival’s shop window, and it would be very good if this gem can be Moscow’s. Iran is a major tool in the hands of Russia to rein in the Americans in Afghanistan and Iraq. Moreover, Europe is dependent on the United States when it comes to strategic balance with the Russians. If it weren’t for the commitment of NATO and the US, Russia’s military might at the conventional level would be more than that of whole Europe combined. The ceiling of Russia’s ambitions is set by NATO, an alliance in which the US has a determining role.

I believe we need to steer clear of two dangers: First, the emergence of a situation where war between Iran and Arab countries will serve the interests of Russia and the US, and the Europeans will not be able to stop it. Second, the withdrawal of Iran from a position of creating negative balance in the global powers’ club. Iran’s becoming completely dependent on Russia or the US in such a way that others will not benefit from cooperation with Iran, will pose long-term threats to the Islamic Republic’s national security. If we manage to ward off these two dangers, we will be able to pass through the “Trump wave.” The world is too big for a country to be able to impose its will on everybody. This applies to us, as well.

(The second part of the interview will be published on Thursday.)