Erdogan; an odd man out with absurd claims 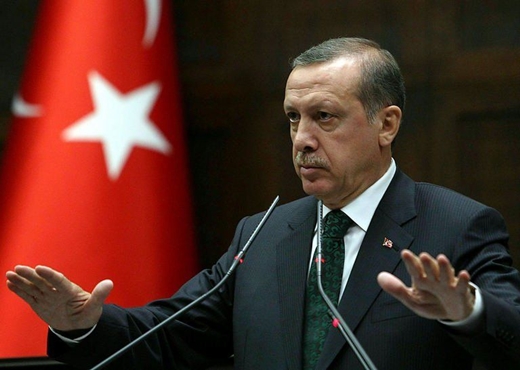 An Iranian expert in Middle Eastern affairs has said that the Turkish president has started to play the blame game by his anti-Iran claims simply to cover up his foreign policy failures prior to the upcoming general elections.

An Iranian expert in Middle Eastern affairs has said that the Turkish president wrongly thinks he will win the support of the Zionist circles and Western countries which hold big sway in the region if he makes comments against the Islamic Republic of Iran.

Jafar Ghannad-Bashi further said that Erdogan’s recent claims – that Iran’s unwavering support for Syrian President Bashar Assad is to blame for the escalating refugee crisis in the region – are eccentric and with no foundation. Alef.ir on September 13 published Ghannad-Bashi’s remarks on President Recep Tayyip Erdogan’s anti-Iran comments and the reasons behind such claims. The following is the translation of what the Iranian expert had to say:

Erdogan’s recent claims can be looked at from two angles: first, he has been a non-achiever in his foreign and regional policy, especially his Syria policy, and his failure is blamed on a strategic error. Erdogan does not admit to his failure at the current juncture. People who are not brave enough to acknowledge their mistakes criticize others and play the blame game. The Turkish president is no exception: he has laid the blame [for his failed policies] at other people’s door.

Second, Erdogan is blaming Iran to win the support of the Zionist circles and the West. He [wrongly] thinks that he can win their backing if he makes comments against the Islamic Republic of Iran.

The Turkish president has come under heavy fire from his own people. Turkey’s economy is not in good shape and Erdogan has grave reservations about victory in the upcoming general elections [which will be held on November 1, 2015 to pick 550 members for the Grand National Assembly].

The Syrian people are fleeing the cities which have fallen into the hands of the Islamic State of Iraq and the Levant (ISIL) terrorists. Members of this terror group are recruited from 80 countries and given military training before crossing the Turkish border into Syria. The emergence of ISIL and its terrorist activities have nothing to do with the Islamic Republic of Iran and its support for Syrian President Bashar Assad.