Era of Unilateral Security Has Come to End: Iran’s Zarif 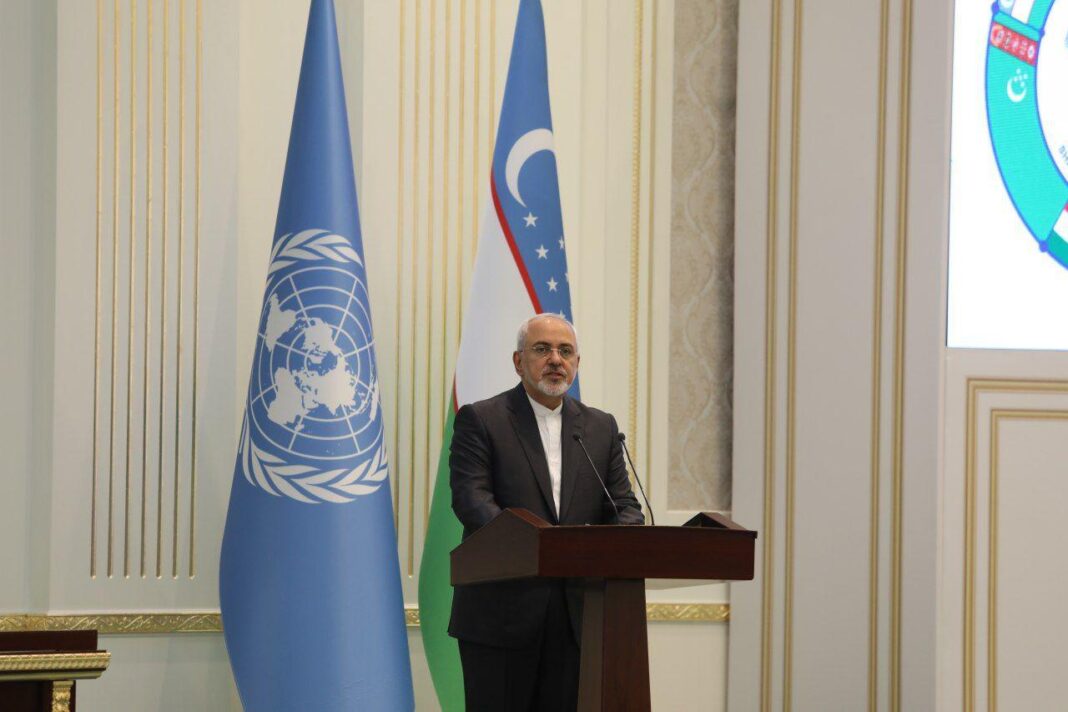 Iran’s Foreign Minister Mohammad Javad Zarif says the era of unilateral security and living in ivory towers and ensuring security based on military power has come to an end since a long time ago.

Speaking at an international security conference in Uzbekistan’s Samarkand, Zarif stated after the events in Iraq, Syria, Yemen and Afghanistan, trans-regional meddlesome powers and the countries that seek to create insecurity by putting the security of others at stake to achieve their fabricated security have well learned that the era of unilateral security has come to an end.

“Security in the present-day interconnected world is not limited to military dimensions, and is a multifaceted, intertwined and comprehensive issue,” underlined Iran’s foreign minister.

The Iranian top diplomat went on to say that “today, you cannot buy security with hundreds of billions of dollars and ship it to the county. Commercialization of security is a new topic added by some international and trans-regional powers to political terms, and unfortunately they have good clients in this dollar-for-security deal.”

“Today, security is an integrated and correlative issue in which security of one depends on the security of the other.”

Zarif also underpinned that nowadays, in order to achieve security, all must rely on “people” as the most important element of a country’s security to attain an endogenous security, and then achieve a sustainable and collective security through a constructive engagement with neighbours.

He noted that the strategy of the Islamic Republic of Iran is based on the development and boosting of cooperation in various fields, making efforts to establish and maintain peace and stability in the region, as well as convergence and cooperation with regional institutions and international organizations.

“We have always been considering the security and stability of our neighbours and neighbouring regions as our own security and stability. Contributing to the resolution of disputes and tensions, bilateral security collaborations to counter the common threats of Takfiri terrorism, extremism, drug trafficking and illegal immigration are the most important manifestations of the active and effective participation of the Islamic Republic of Iran in boosting and strengthening stability and security in the Central Asian region,” he told the International Conference on Security and Sustainable Development in Central Asia.

Zarif also underlined that effective confrontation with extremism and Takfiri terrorism, which poses a serious threat to the security and stability of the region in West Asia, Central Asia, the Caucasus, the Indian subcontinent, and even the regions in North Africa and Southeast Asia, needs the all-inclusive and multilateral cooperation, interaction, synergy, and consultation of regional countries.

“Establishing a Nuclear-Weapon-Free Zone in Central Asia is a move that shows a good understanding of security. The Islamic Republic of Iran is not only religiously opposed to the development, production, and use of such weapons, but also seriously believes that these weapons per se undermine stability and security, and must be eliminated from the world. Since 1974, when Iran proposed a Nuclear-Weapon-Free and WMD-Free Zone for the Middle East, the country has pursued the issue, but to no avail because of the aggressive and hegemonic policies of the Zionist regime of Israel in acquiring nuclear weapons, and the US support for Tel Aviv. By clinching the nuclear deal and fulfilling all our commitments under the Joint Comprehensive Plan of Action (JCPOA), we have in action proved our compliance with the principle of non-proliferation and nuclear disarmament,” added Iran’s foreign minister.