Era of occupation, domineering over: Larijani 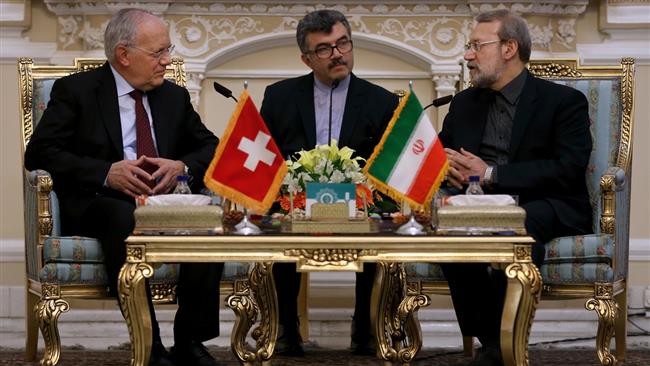 Iran’s Parliament (Majlis) Speaker Ali Larijani says countries must avoid pursuing warmongering and hostile approaches as the era of occupation and hegemony has come to an end.

“The Islamic Republic of Iran’s policy is [based on] establishing peace in the region,” Larijani said in a meeting with visiting Swiss President Johann Schneider-Ammann in Tehran on Saturday.

He warned that using terrorists as a means to an end would cause problems for all countries.

Larijani pointed to “good” relations between Tehran and Bern and said the two sides have many commonalities in international issues.

The Iranian Majlis speaker said the two countries have the potential to expand cooperation in the fields of science, technology and industry and added that Switzerland can make joint investment in Iran’s industrial and technological projects.

The Swiss president, for his part, said his country is interested in promoting the policy of negotiations between Iran and Saudi Arabia to settle their differences.

Schneider-Ammann expressed hope that negotiations would help solve the ongoing crises in Syria, Yemen and other war-stricken countries.

He further said that the expansion of economic and scientific cooperation between Iran and Switzerland would open a new chapter in mutual relations.

On Saturday, he held talks and attended a joint press conference with Iranian President Hassan Rouhani and also met Chairman of the Expediency Council Akbar Hashemi Rafsanjani. Later in the day, he held a separate meeting with Leader of the Islamic Revolution Ayatollah Seyyed Ali Khamenei.