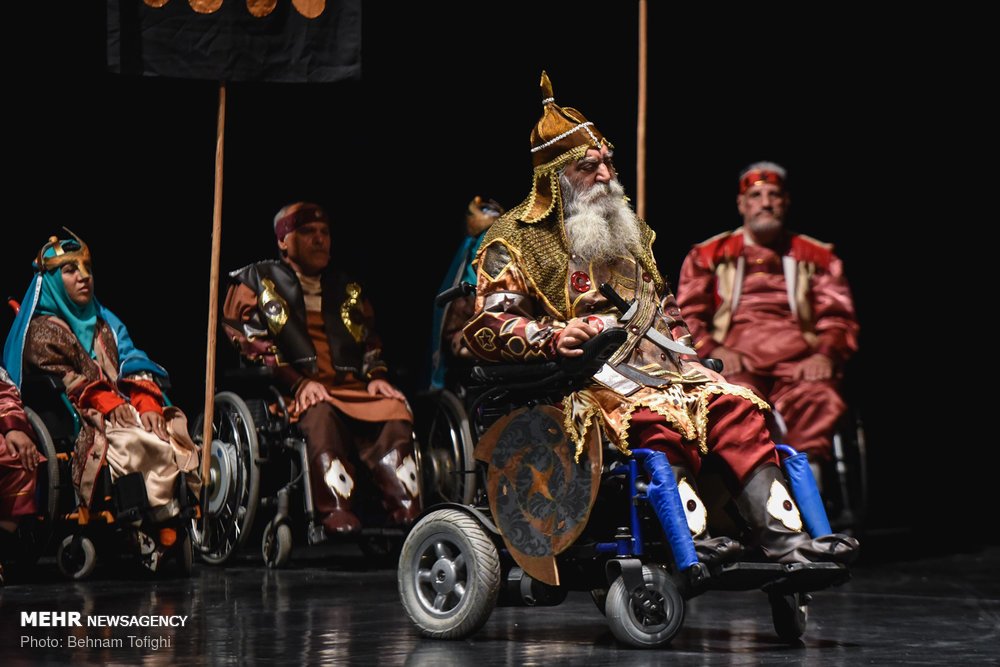 An epic play with 30 elderly and disabled actors was finally staged in Iran after nearly a decade of rehearsal.

The wheelchair-bound elderly finally managed to stage their play titled Rostam and Sohrab, a part of the 10th-century Persian epic Shahnameh (Book of Kings) by the renowned poet Ferdowsi.

The crew members, some of whom has been living for five to over twenty years in Kahrizak Charity Sanitarium, began their rehearsal about nine years ago under the leadership of Mirkamal Mirnasiri, widely known in the charity foundation as “Ostad” (Master). They regularly read the play written by Mirnasisri based on the epic text over the past years.

During the years of rehearsal, some of the actors and actresses died but the rest survived to stage the play in Tehran’s Vahdat Hall.

Though it is a theatrical account with its own music and design, the Rostam and Sohrab play by these actors is more like a combination of hope and efforts to achieve goals in life.

Its main audience is first the crew of the play themselves and then those who come to watch it. The hope for life is the most brazen element visible in the eyes and words of each member of the crew.

ISNA reporter attended one of the rehearsals of the crew and made a report based on some interviews made by the crew members. Below you can read some parts of the report selected by IFP:

The role of Tahmineh, the mother of Sohrab is played by a middle-aged woman with a nice appearance. It’s now 29 years that she has been living in Kahrizak. “I have nobody in my life. So I decided to come here myself. I invite all people to come and watch our play because their presence would make us very happy.”

Esmaeil Cheraghi plays the role of Sohrab. He is the youngest member of the group. He has been living in Kahrizak since four years ago. He has decided to come here himself.

Elaborating on his role, Esmaeil says he joined the group about one and a half years ago. “I replaced Mr Ettehad who died some years ago. I was familiar with the play to some extent. Performing in the play has highly raised my morale. The play has opened a new window in our lives which used to be filled with despair.”

Esmaeil went on to say that “I’m sure that the presence of the families of the elderly in Vahdat Hall will definitely raise the morale of the crew members. They would be happy to see their relatives among the audience.”

The actor playing the role of Rostam is a man with long white beard. He calls himself a veteran in theatre.

Soleiman, who is older than the two other leading actors, elaborated on his calmness during the performance. “I have no stress for performing in Vahadat hall because it’s been 18 years that I’ve begun my career in the acting area. I’m also a Quran reciter. I used to play some roles in my wife’s movies.”

“I left home to come here 20 years ago. I came here myself because I couldn’t stay at home due to my physical disability. I’m happy with my life now and my wife has managed to properly bring up our children in my absence. We are regularly in contact,” he noted.

The leading actors and actresses suffer from physical disability. Despite their problems, the crew members have put great time and energy into accomplishing the project assigned to them.

The Rostam and Sohrab play, sponsored by Kahrizak Charity Foundation and directed by Mirkamal Mirnasiri, was staged from November 11 to 13.

Below you can see photos of the play taken from Tasnim News Agency: