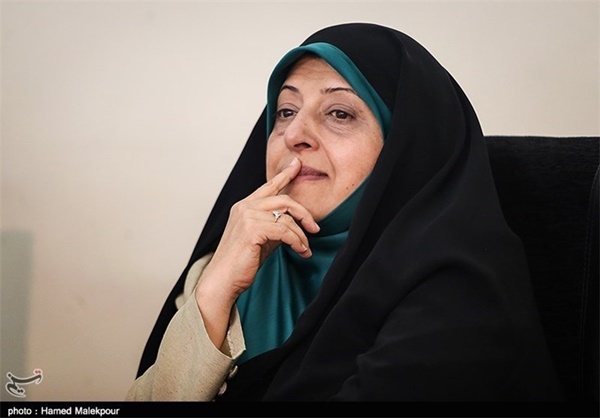 The Head of the Environmental Protection Organization listed Iran’s environmental problems with reference to the upcoming Parliamentary Elections, asking the people to help her enact the policies laid out by the Supreme Leader by electing a parliament who cares about nature. Voting at the ballot box was a right that had been formalized by the Revolution and the Constitution, she said. She emphasized, “If people don’t participate in their own destiny, and aren’t self-determining, they deprive themselves and their families of an opportunity.”

As reported by the Farsi-language news and analysis site Entekhab (a summary here translated by IFP), Masoumeh Ebtekar talked about the environmental expectations about the 10th Parliament. She said, “We are expecting that, with a broad turnout of people, and the activity and effort which will be made, wise and knowledgeable MPs will be elected, ones with high legal and scientific abilities, and good understanding. This will mean that we can benefit from a 10th Parliament that has a suitable understanding and knowledge of the general global, regional and national environmental conditions. Also, they must know about our special national situation, including problems such as water issues and the severe decreases in groundwater levels.”

The Head of the Environmental Protection Organization continued, “We hope to have MPs in the 10th Parliament who consider environmental matters just as much as other issues. We don’t want any one-dimensional MPs. We expect that, if an economic issue is under discussion, we should make economic decisions that do not adversely affect Iran’s fragile climate.”

Ebtekar went on to say that “An MP must consider social issues, and must realize just how much the environment can affect social matters, and also how much the people can help with environmental issues, if given appropriate space and freedom in the procedures of lawmaking and government supervision.”

“The MP must be aware that there are over 35m people influenced by metropolitan pollution. Solving this issue is very important for reducing treatment costs and increasing life expectancy. We need to plan well for this, and Parliament can play a decisive role. In addition to this, it is important to maintain national biological diversity in this challenging climate, and protect Iran’s plants and biology. Working with Parliament, we must not allow endangered species to become extinct.”

She pointed out that Iran has fragile ecosystems, such as ponds, natural Hyrcanian forests, and oak forests. She explained, “Unfortunately, deforestation and smuggling from these forests are continuing, and our pastures are also facing difficulties. We’ve been talking about balancing and livestock and pastures for years, but still haven’t achieved a good situation.”

She also mentioned, “Bravery is important for an MP, because an MP who represents a single party or group may face problems when trying to stand up for the people’s rights, since some of those rights, especially environmental ones, might conflict with their party’s economic policies. If the MP isn’t brave enough or free enough, they won’t be able to stand up for the people’s rights on certain issues, for example, if they have to make a decision about building a road through a forest.”

The Head of the Environmental Protection Organization reminded us, “Desertification and dust storms are still happening. We hope that the 10th Parliament cares about these matters, as well as the rivers, seas and coasts. These are our national resources, and we cannot be indifferent towards them, lacking a proper plan. Fortunately, we have the Supreme Leader’s policies. We hope that the 10th Parliament will consider these, and help the country in facing all these dangers.”