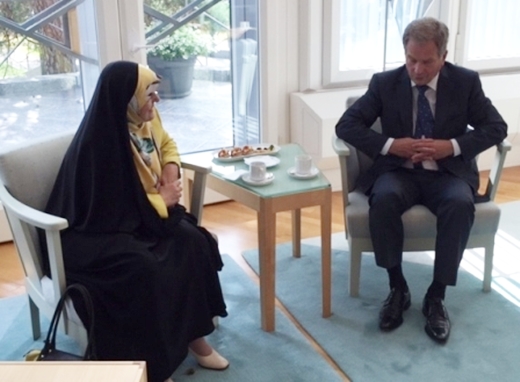 Iran and Finland have the potential for closer ties in industrial, trade, the environment, climatology and tourism areas, Ebtekar told Finnish President Niinisto.

Director of the Environment Protection Organization Masoumeh Ebtekar in a meeting with Finnish President Sauli Niinisto called for the further expansion of bilateral ties with Finland in different areas, especially the environment and climatology.

“The two countries have appropriate potential for the broadenings of ties in industrial, trade, the environment, climatology and tourism areas,” Ebtekar said during the meeting in Helsinki on Thursday.

The Finnish president, for his part, congratulated the Iranian nation on striking a final nuclear agreement with six world powers.

President Niinisto conveyed his warm greetings to his Iranian counterpart Hassan Rouhani, and said, “The negations between Iran and world powers were lengthy and difficult, but the outcome has been positive so far.”

The Finnish president described Finland-Iran relations as good, and said, “We have not had problems so far and we welcome expansion of ties with Iran. And the trade barriers will also be solved with removal of the sanctions.”

“A delegation comprising Finnish Development and Foreign Trade Minister will visit Iran within the next two to three months,” President Niinisto added.