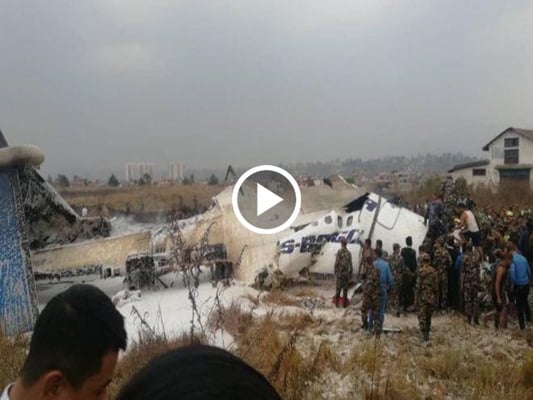 At least 23 people are believed to have survived after a plane carrying 71 passengers and crew crashed on landing at Nepal’s Kathmandu airport on Monday.

The US-Bangla Airlines plane carrying 67 passengers and four crew members slipped off the runway as it was landing and fell down a slope, sliding for about 300 metres before it stopped at a football pitch, leaving a trail of twisted metal, paper and luggage along the burnt grass.

Nepali police said at least 38 were killed and 23 injured, with another 10 people still unaccounted for.

Smoke could be seen billowing from the site where the plane – which originated from Dhaka in Bangladesh – is believed to have veered off the runway while landing.

All flights in and out of Tribhuvan International Airport have been cancelled.

Firefighters battled to extinguish the burning wreckage and rescue passengers as plumes of black smoke rose above the site, to the east of the airport’s runway.

At least 24 badly burned bodies, some covered with cloth and others in partially sealed body bags, could be seen laid our beside the charred frame of the plane.

Nepal has suffered a number of air disasters in recent years, dealing a blow to its tourist industry.

In early 2016, a twin otter turboprop aircraft hit a mountainside in Nepal, killing all 23 people on board.