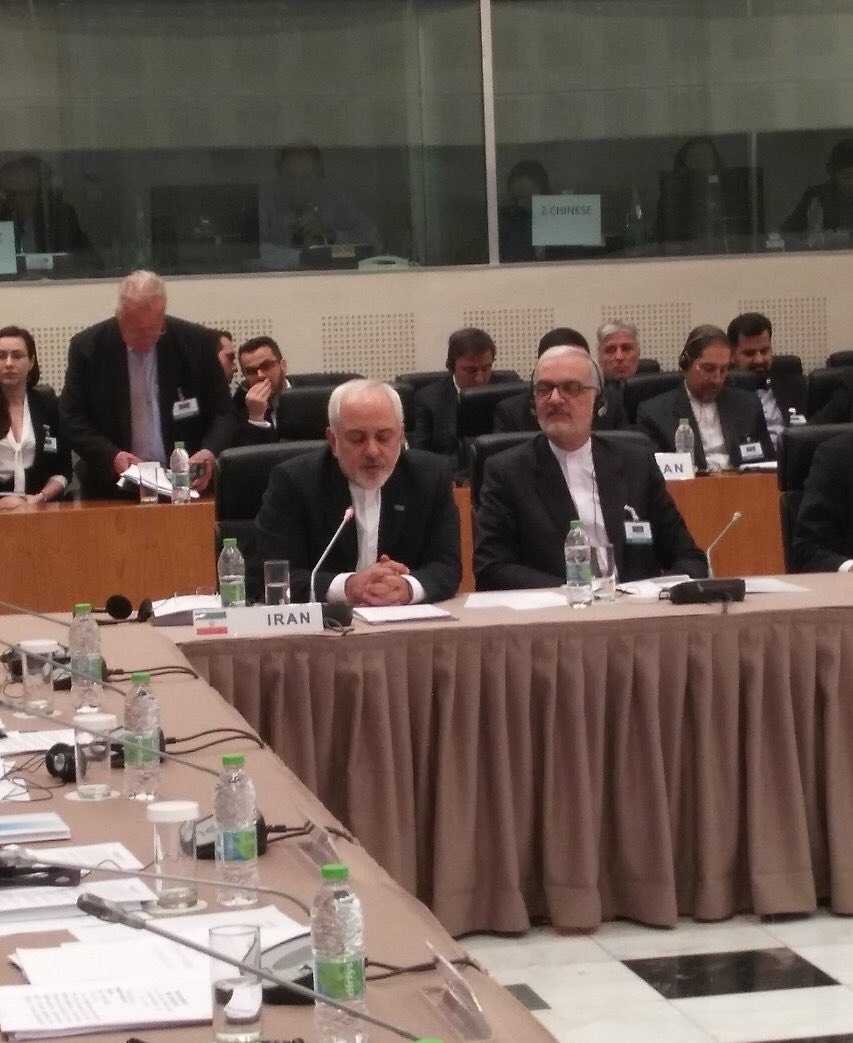 Iranian Foreign Minister Mohammad Javad Zarif says that dialogue and moderation are twin remedies for many ills of our times.

Addressing the International Forum of Ancient Civilizations in the Greek capital of Athens, Zarif said that the world needs to recognize and respect such norms and principles as diversity, inclusion, tolerance, moderation, dialogue, justice, fairness, human rights, democracy, and good governance despite inevitable differences on applications and implementations.

“Our gathering here represents a genuine effort to synergize the cumulative contribution of all civilizations — which truly constitute the common heritage of humanity — to address the daunting challenges all of us face, individually in our respective environments and collectively on the global scale, in a complex world replete with crises of various kinds, and most certainly a future fraught with disquieting uncertainties of all sorts.”

Here is the full text of his Monday speech provided by the Foreign Ministry’s website:

It is a great pleasure for me to represent Iran in the Ancient Civilizations Forum. The very idea of establishing a forum for ‘ancient civilizations’ is a valuable enterprise; it signifies the recognition of the enduring role of civilizations in our intimately interconnected modern world. Let me take this opportunity to thank our friend and colleague, Nikos Kotzias for his wise and timely initiative and for the excellent arrangements, bringing diplomats and academics to Athens to share ideas and plan ahead. I would also like to express my gratitude to the people and government of Greece for their warm and gracious hospitality.

Our gathering here represents a genuine effort to synergize the cumulative contribution of all civilizations — which truly constitute the common heritage of humanity — to address the daunting challenges all of us face, individually in our respective environments and collectively on the global scale, in a complex world replete with crises of various kinds, and most certainly a future fraught with disquieting uncertainties of all sorts.

It also signifies that science, technology, progress, and material well-being – whose fruits, much to our chagrin, are unevenly distributed – have all simply failed to solve our common problems, nor do they appear to herald a better future. Our claim of recourse to and reliance on civilizational contribution is, therefore and by definition, a huge task, and undertaking.

My remarks today at this Forum are brief and targeted; they focus on what a forum of this kind, character, and composition means, first and foremost, for its participants, and in a general sense, for the bigger global community.

Let me underline that we are not here to engage in expansive, oratorical celebration of our respective civilizations and bask in glorifying them or describing their attributes, beauties, virtues, or accomplishments in the past – which we represent, of which we are proud, from which we inherit, and to which we owe.  The existing rich reservoir of accumulated knowledge of our ancient civilizations is fully known to the experts in the field in academia as elsewhere, and continue to inspire scholarly research.

In this collective endeavor, we need to reflect on the factors that have shaped our past civilizations and have sustained them, as dynamic, living entities. We need to be able to draw general lessons from the past and learn from their ebbs and flows along the historical continuum.

A retrospective look at the overall contours of the several-thousand year-old human civilization informs us that mutual exchange and interaction between and among human communities, each with their own particular attributes, have brought to bear, in varying forms and to differing degrees and at various historical intervals, on the formation of common human civilization. This continuing exchange and interaction between and among a rich diversity of human groupings, from the very early times of recorded human civilization up to our very days, is anchored in dialogue and understanding, through the mediums of intellectual reflection, literature and art.

To emphasize the valuable contribution of the literature of our ancient civilizations to human empathy and realization of our common destiny, let me provide one beautiful, transcendental example from Sa’adi, the renowned Iranian poet of the 13th century:

When time afflicts a limb with pain

If thou feel not for other’s misery

A human being is no name for thee.”

These mediums continue to function as the means to rely on, cherish, and utilize with the ultimate objective of ensuring civilizational continuity. The difference, between our world today and the past, however, lies in the degree of complexity we encounter nowadays, whether in terms of the number and variety of actors, the kinds of challenge in various arenas of human life on the planet, or the quite complex and ever-complicating web of relations. Yet, the truth of the masterpiece by Sa’adi 800 years ago cannot be more apparent than in today’s globalized world, reminding us that humanity is not merely a “global village”, but a “single human body”, where no part can rest, let alone gain and prosper, when other parts are suffering.

Of course, there are formidable common challenges that the human community is currently facing; ranging from the elusive goals of sustainable development, protection of the environment, and eradication of poverty for the larger part of the international community to effective combating of such rather new twin phenomena of extremism and terrorism as universal plagues. The globalized, interconnected nature of the state of affairs across the planet makes it imperative that common problems need common solutions. And as we are witnessing a renewed tendency for the tested – and failed – unilateral approaches, I should underline the need to seek multilateral solutions.

The objective reality on the ground has changed, so has the urgency of rising to the challenge and grandiosity of the needed common, collective response on the part of the global community. And it is right here that the special role of ancient civilizations comes into the picture. These civilizations have much more accumulated knowledge, intellectual depth, time-tested experience, and the hard-won historical discretion to draw on as compared with other much younger members of the human community.

Given the enormity of the challenges and the very existence and activity of so many formal and not-so-formal entities engaged in addressing them and claiming to offer remedies and solutions, and considering the inescapable imperative of being objective with a finger on the pulse and a foot on the ground, the task before this Forum calls for a focused approach, a well-defined, modest agenda, and a practical format to ensure active and effective pursuit of our common objectives. We can neither afford to be oblivious to the actual constraints in the world, nor fall in the familiar easy trap of setting lofty inaccessible ideals.

What we need to establish at this initial, and yet critical, stage of the work of the Forum is to arrive at a general collective understanding of the overarching, fundamental concepts and principles that will shape and guide our work in the future. We need to recognize and respect such norms and principles as diversity, inclusion, tolerance, moderation, dialogue, justice, fairness, human rights, democracy, and good governance –despite inevitable differences on application and implementation.

As the inheritors of ancient civilizations, with the necessary depth of understanding and historical reflection to appreciate that triumphs as well as trials and tribulation are but short moments in the millennial historical retrospect, we need to challenge the prevalent paradigm of “might makes right”, the paradigm of exclusion, which in its various forms has invariably brought bloodshed and devastation to human society throughout history and has given rise to violence, underdevelopment and extremism. This paradigm has governed the relations among communities and nations for far too long, resulting in wars, atrocities, occupation, oppression, discrimination and displacement. The rampant terrorism and extremism currently faced by countries and regions across the globe, including in West Asia, the cradle of many ancient civilizations, are heinous products of this outdated paradigm.

Human society today is in desperate need of embracing the enriching diversity within and between civilizations. The inheritors of ancient civilizations have a historic responsibility to be in the forefront of promoting dialogue and inclusion to usher in a new paradigm of global relations. In 1998, former Iranian President Khatami, in his capacity as Chairman of the Organization of Islamic Conference – now called Organization of Islamic Cooperation – bringing together the heritage of Iranian civilization and lofty Islamic values and teachings, presented the initiative of “Dialogue among Civilizations” which was overwhelmingly welcomed by the UN General Assembly, designating the year 2001 as the UN year of Dialogue among Civilizations. The envisaged dialogue originated from the assumption that sources of knowledge and wisdom are inherently diversified and that each civilization has much to offer and much to learn: making dialogue among civilizations mutually enriching and accumulating.

This signified a clear departure from “paradigm of exclusion” to “paradigm of dialogue and inclusion”.  And in September 2013, President Rouhani presented a similar initiative to the UN General Assembly, premised on the same imperative, calling for a World Against Violence and Extremism (WAVE), which was unanimously approved by the General Assembly.

Let me conclude by emphasizing that as representatives of ancient civilizations, which have weathered many storms and seen many rise and demises of empires, we have the necessary historical depth to promote the twin remedies of many ills of our times: dialogue and moderation.