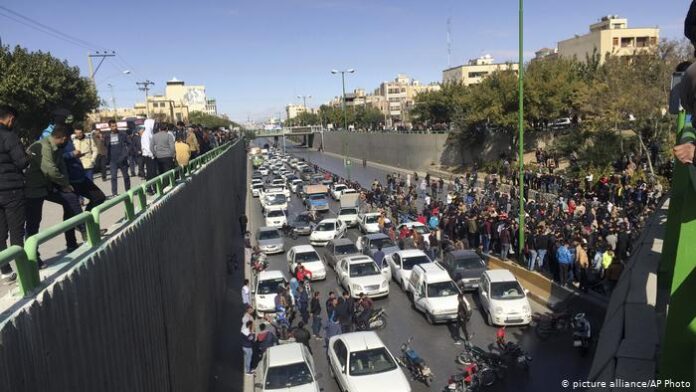 Sporadic protests have erupted in various Iranian cities on Saturday one day after gasoline prices were tripled without any earlier announcement.

In some cities demonstrators have found creative ways to express their protest. In Chalus, a university professors rode a donkey to work in protest at the fuel price hike.

Others have also started playing cards and football while smoking hookah in the middle of the blocked streets.

However, in a number of cities like Tabriz, clashes have erupted between security forces and the protesters. A video of Tabriz protests shows a car trying to ram into the anti-riot police.

Rioters have set fire on several banks across the country in such cities as Behbahan, Karaj, Isfahan, and Tehran, according to videos shared online. Several gas stations were also set on fire in Shiraz and other cities.

The Governor of Sirjan, a city of Iran’s Kerman province, has confirmed that a person was killed and several were injured on Friday night.

The official said the victim was an ordinary person who was killed during clashes between security forces and a group of vandals trying to make inroads into the city’s main oil reserves.

Several other people have also reportedly lost their lives in the Friday clashes.

The rallies are held as the country is also gripped by a heavy snowfall that per se has left many people stranded in roads and streets.

The protests erupted after Iran started rationing on the purchase of gasoline and substantially increased the price of fuel in what the government calls a move to assist the needy.

The National Iranian Oil Products Distribution Company (NIOPDC) said in a statement late Thursday that the price of a liter of regular gasoline had gone up to 15,000 rials (12.7 US cents) from 10,000 rials and the monthly ration for each private automobile was set at 60 litres per month. Additional purchases would cost 30,000 rials per litre.