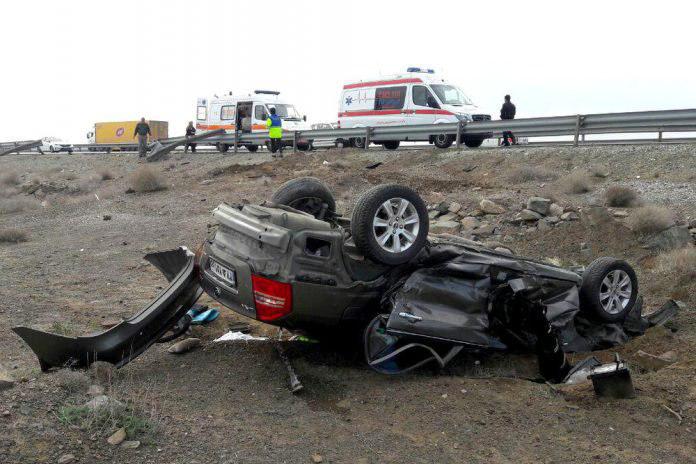 The first two weeks of the Iranian New Year (which starts on March 20 or 21) is a major travel season with the highest number of holidaymakers along with road accidents.

During the first two days of this year’s Nowruz holidays, 145 people were killed and 2,950 were injured in road mishaps, the deputy traffic police chief, Musa Amiri, said.

“The exact numbers about casualties and injured people during the two-week holidays will be announced next week by the Iranian Legal Medicine Organization (ILMO),” IRNA quoted him as saying.

During last year’s holiday season 389 people were killed in 294 road accidents in which 147 drivers were violators of traffic laws while in the remaining cases low-quality vehicles and unsafe roads were blamed for the fatal collisions.  According to ILMO, over the past five years 5,384 people died in road crashes during the Nowruz holidays.

On Sunday, Colonel Mohammad Hussein Hamidi, the traffic police chief said the number of people killed on the spot has decreased by 7% compared to the same period last year. The number of journeys increased by 10% in comparison to the previous year, IRNA quoted him as saying.

“A total of 30 air ambulances were responsible for helping the inured. The number of air ambulances has increased by 10% compared to the same period last year,” he said. The measure decreased the mean time from injury to arrival in hospitals and reduced the number of people killed at the scene of accidents. However the number is still high compared to other countries.”

Hamidi had said earlier that the rate of road mishaps dropped by 38% over the past decade.

He linked the decline to closer interaction between police and other institutions, and use of advanced technology to control traffic and the motorists.

In the past two years 2,200 new surveillance cameras were installed across the country to improve monitoring of arterial suburban roads to 30,000 km from 5,000 km in 2015. The cameras can record seven types of violations (5 in big cities and 2 on suburban roads).

Additionally, cameras installed on the two main northern roadways of Chalus and Haraz, are able to record overtaking from the wrong side and other lawlessness on the road.

Smart cameras have also been installed on police patrols in the cities. Some road surveillance cameras have been upgraded to ensure better performance in recording traffic violations.

Currently, most surveillance cameras in the cities have been upgraded to record five offenses: speeding, running the red light, driving in prohibited areas, entry into even-odd restricted zones and stopping on a crosswalk. On highways they record two offenses: excessive speed and failure to pay toll.

According to ILMO’s latest report on road death toll (released on March 4), during the first ten months of the past year 13,826 people lost their lives in road accidents, of whom, 10,825 were men and 3,001 were women.

Road traffic injuries have been neglected in the global health agenda for years despite being predictable and preventable, Financial Tribune reported.

An average, 3,000 deaths in road mishaps occur every day around the world and they are ranked as the 11th most common cause of death in developing countries, with young people between the age of five and 24 facing the highest risk. People aged between 15 and 44 years account for 48% of global road traffic deaths.

Low and middle income countries have less than half of the world’s vehicles, but they contribute to over 90% of the total number of road traffic deaths.

According to figures released by World Atlas in September 2016, Iran is ranked 4th on the list of countries with the highest road traffic deaths.

A pattern of traffic accident rates in some provinces indicates that provincial roads (in particular in Fars, Khorasan Razavi, Tehran provinces) are not safe for driving.

According to the latest report released by ILMO website (www.lmo.com) during the first ten months of the previous year (ended March 20), Fars (1,282), Khorasan Razavi (995), Tehran (987), Isfahan (883), and Kerman (781) provinces had the highest rates of traffic-related deaths.