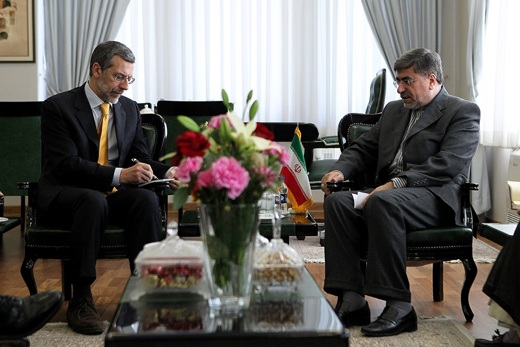 The draft of the memorandum of understanding has been handed to Italian officials for approval, said Ali Jannati.

Minister of Culture and Islamic Guidance Ali Jannati in a meeting with the Italian ambassador to Tehran has called for promotion of cultural ties between Tehran and Rome. What comes next is the translation of a report Ettela’at daily published on the meeting on January 26:

A report posted on the official website of the Ministry of Culture and Islamic Guidance Sunday said that in a meeting with the Italian diplomat, Ali Jannati stressed the implementation of cultural and arts deals between the two countries. “The draft of a memorandum of understanding has been handed to Italian officials. Now we are waiting for them to sign it,” Jannati said.

He went on to say, “The presence of centers which focus on Iran and Eastern studies in Italy shows the two nations have much in common when it comes to culture and rich ancient civilization. The approach of both nations to each other’s history and culture is positive.”

Hailing as constructive the role that Italy has played in the reconstruction of Bam, [a citadel city in southern Iran struck by a devastating earthquake in 2003], he added, “During the Iran visit of the Italian culture minister last year, a number of constructive meetings on closer cultural cooperation between the two countries were held. Iran has had long-running, close relations with Italy in different areas. Archeological excavations, especially in the city of Isfahan by a team of Italian experts, are an example of such ties.”

He added, “The willingness of the two countries to ink agreements in different fields including culture, politics and economy reflects their interest in establishing closer bilateral relations.”

Italian Ambassadorto Iran Mauro Conciatori, for his part, said, “Aside from the centuries-old culture and civilization, Iran has a geographically strategic position which can be used as a bridge among nations. Participation in Venice Biennial provides Iran with a perfect opportunity to end the unfair views some members of the international community have toward Iran. Such presence can spell an end to biased prejudgments.”