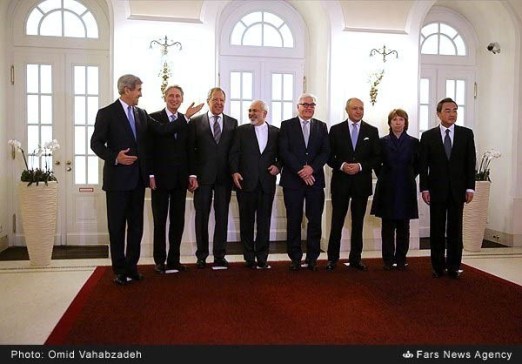 With negotiators talking against the clock to hammer out a final deal between Iran and P5+1 and news coming in thick and fast, IFP has decided to bring its audience up to speed by the moment as national and international media outlets release reports about the latest developments in Vienna.

The items below, released in stages on November 24, appear in reverse chronological order:

13:15 GMT Fars News Agency: Nuclear talks between Iran and P5+1 came to an end in Vienna. The negotiations have been officially extended until July 1, 2015. Every month, $700 million in Iran’s frozen assets will be released.

12:23 GMT Fras News Agency: On the last day of Vienna nuclear talks, European markets have their eyes riveted on the outcome of the negotiations.

12:20 GMT Tasnim News Agency has quoted Deputy Director of Russian Foreign Ministry’s Second Departmenton Asian countries Konstantin Alekseyev as saying that Moscow seeks to promote nuclear cooperation with Tehran. Recalling nuclear talks between Iran and P5+1, he described the clinching of a deal as tough, but he underlined Moscow’s emphasis on compromise.

12:15 GMT Iranian Students’ News Agency (ISNA) has quoted sputniknews.com as reporting the remarks of Chinese Foreign Minister Wang Yi, who said China hopes to see a comprehensive agreement clinched on Iran’s nuclear program and has brought its own proposals to the table, but more time may be needed because of technical difficulties standing in the way.

12:07 GMT Shahrvand (newspaper of Iran’s Red Crescent Society): “The world is in anticipation of a ‘White Message [of peace]’”. The daily characterizes the meeting between Zarif and Kerry as decisive.

11:59 GMT Javan daily tells Iranian negotiators: “Don’t rush. Republicans and Democrats are the two sides of the same coin of animosity toward Iran.”

11:42 GMT Fars News Agency: A source close to the Iranian negotiating team says the deadline to reach a comprehensive deal won’t be extended any more than a few hours or days at most.

11:35 GMT Fars News Agency: A Western diplomat has confirmed reports that the Geneva deal will be extended, saying a political statement will be released shortly to report progress in nuclear talks.

11:20 GMT Fars News Agency: Top diplomats of China and Russia have held talks about the ongoing nuclear talks in Vienna.

10:57 GMT Haft-e Sobh: “A meeting on board the private plane of Saudi Foreign Minister Prince Saud al-Faisal, who flew to Vienna, with US Secretary of State John Kerry indicates that a country [which claims to wield a lot of clout and influence] in the region has started to get panicky about the prospects of an accord between Iran and P5+1 so much so that it is taking measures which defy all diplomatic norms.

10:42 GMT Tasnim News Agency has quoted the Independent’s Robert Fisk as saying, “Whatever happens with the nuclear talks, it [Iran] will again be the most powerful nation in the Muslim Middle East one day. People should plan to invest in the new Iran. If the Americans and the Iranians can reach agreement, Iran could again be the policeman of the [Persian] Gulf.”

10:20 GMT Aftab-e Yazd has quoted the Iranian Students’ News Agency (ISNA) as reporting the remarks of Mohsen Rezaei, the secretary of the Iranian Expediency Council and a former Commander of the Islamic Revolution Guard Corps (IRGC) during the 8-year war between Iran and Saddam’s Iraq. Rezaei said, “Whatever the outcome of the nuclear talks, it is the result of the Supreme Leader’s backing and coordination among all forces contributing to the revolution.” He went on to say that if the talks failed, the buck stops with the Americans and some regional countries.

10:20 GMT Aftab-e Yazd has quoted Mohammadreza Bahonar, a principlist MP, as saying, “The stance and red lines of the establishment are obvious and Iran’s negotiating team won’t overstep these lines.”

10:07 GMT Khabaronline (a news website) has cited Laura Rozen, an Iran nuclear expert and a journalist with Al-Monitor [an online newspaper], as saying that prior to the negotiations in Vienna at Muscat talks both sides faced some differences, but it was clear that they both wanted the talks to be conclusive. She expressed optimism over the outcome of the talks and said a comprehensive deal between Iran and P5+1 will be finally clinched.

10:05 GMT The Islamic Republic News Agency (IRNA) has quoted France 24 as reporting that the continuation of Vienna nuclear talks is useful for both sides. The French TV service said walking away from the talks by either side will have consequences.

In that case, the West would be unable to monitor Iran’s nuclear facilities. Continued nuclear talks have other advantages too. One such advantage is the apparently unlikely alliance between Persian Gulf states, including Iran and Saudi Arabia, two regional rivals, in the battle against ISIL in Iraq.

In fact, failure of the talks can spell an end to such unconventional cooperation and help ISIL blaze its way into other parts of the region.

09:10 GMT Fararu (a news website) has quoted the Islamic Republic News Agency (IRNA) as reporting that at the bilateral talks between Iranian Foreign Minister Mohammad Javad Zarif and US Secretary of State John Kerry, Iranian photographers were initially denied entry to the venue of the talks by Kerry’s bodyguards. But, they were allowed to snap photos after Zarif intervened.

08:46 GMT Tasnim News Agency referred to a brief report posted by Russia’s Itar-Tass which quoted a source close to the talks as saying that Iran and P5+1 have failed in this round of talks and a final document is unlikely to be agreed in time. The source added that extension of talks is being discussed and might take months.

08:41 GMT Tasnim News Agency has quoted Itar-Tass as reporting that Russian Foreign Minister Sergey Lavrov and US Secretary of State John Kerry have discussed in detail at a meeting in Vienna the course of negotiations between Iran and P5+1 which is nearing completion.

08:30 GMT Tasnim News Agency has highlighted a repeated remark by Foreign Minister Mohammad Javad Zarif as saying that the diplomats will forge ahead with bargaining to the end and the outcome of the talks will be determined at the last moment.

08:23 GMT Fars News Agency has cited an official close to the Iranian negotiating team as saying that Iran and P5+1 prefer striking a deal in Vienna.

08:18 GMT Tasnim News Agency has quoted the Jerusalem Post as reporting that Israel would consider military option against Iran in case of ‘a bad deal’.

08:15 GMT Dispatches: China’s Foreign Minister Wang Yistarted the final day of the talks in Vienna with a working breakfast with Mohammad Javad Zarif. He will later have separate meetings with US Secretary of State John Kerry and Russian Foreign Minister Sergey Lavrov.