Cooperation with US depends on progress of JCPOA: Nahavandian 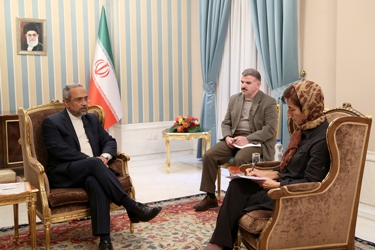 Any possible Tehran-Washington cooperation will depend on the way the nuclear accord is implemented, Nahavandian said.

President Rouhani’s chief of staff Mohammad Nahavandian said Monday that progress in the implementation of the Joint Comprehensive Plan of Action is a test for seriousness and honesty of the US and Iranian cooperation with the US.

Nahavandian told El País, the Spanish newspaper, that people chant the slogan “Down with the US” to express their objection to US foreign policy in the Middle East and its hostility to the Iranian people over the past three decades.

He said that the slogan carries the message of opposition to US foreign policy, not to the American people.

Nahavandian said when people chant slogans in streets, what they have in their mind is US support for the coup that toppled the popular government of former Prime Minister Mohammad Mosaddegh in 1953. They do remember when the US Navy downed Iranian passenger plane over the Persian Gulf.

He said what should be corrected is the hostile foreign policy of the US administration and if a policy shift, as certain officials in the US talk about, happens, and Iranian people see the change in practice, the slogan may be reviewed.

In response to a question on whether opponents of JCPOA will be successful to derail it, Nahavandian said Iranian people closely follow the nuclear issue and different political groups present their comments on the issue because Iran is a democratic state.

“However, Iran has always been loyal to its commitments. JCPOA is the outcome of a decision made by the legal authorities of the governing system and there is substantive backing for its success.

“On our part, there is no doubt that such an issue should go on. Of course, due to the long record of distrust in the US, people should be very careful that all the dimensions are taken into consideration and confidence should be obtained that the other party will not violate the accord and will not seek pretext to violate it. If the other party is serious and honest, no doubt, Iran will also be serious and honest,” he said.

On the possibility of promotion of Iran-US cooperation, Nahavandian said as the Supreme Leader has already said the nuclear accord is a test for seriousness and honesty. If they adhere to what they have promised, that will be a positive sign. Any possible cooperation will depend on the way the accord is implemented.”