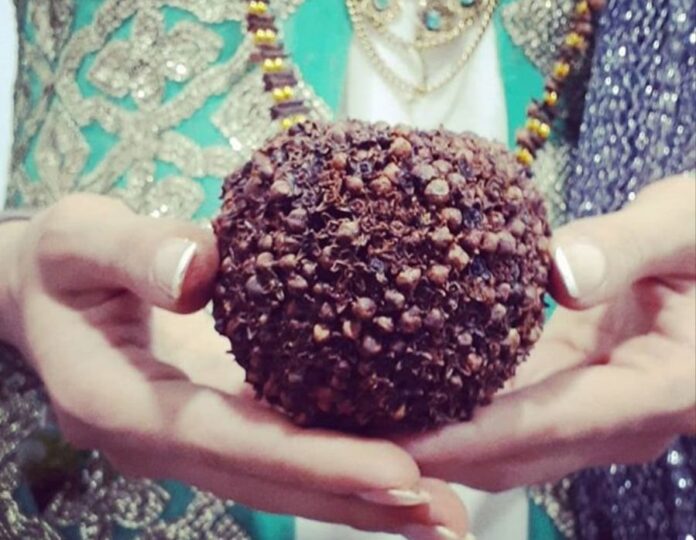 In the Kurdish culture, when a boy and a girl fall in love, they pick the best and biggest apple at hand and, as Kurds would say, they make it Mikhak-Riz or Mikhak-Koub, that is nail it with cloves. They then give the apple as a present to the other party and this symbolises love.

Cloves are the dried flower buds of the clove tree and have been in use since 2,000 years ago in traditional medicine as a form of treatment, in the forms of bracelets and necklaces as ornaments and as fragrance.

To make a “clove-nailed apple”, cloves are pinned into an apple through their sharp end and one by one, so that the apple is fully covered with cloves.

The apple dries out gradually after being nailed by cloves and turns into a dry sphere. This process takes one month to complete. But the dried apple can then keep its shape for more than 100 years.

What is interesting is that, even after 50 years, if the apple is sprayed with a little water, a fresh fragrance of cloves fills the air, reminiscent of a first love.

Cloves have a sharp end that penetrates the apple effortlessly, but they do not come off easily. Some believe the word “Mikhak”, that is the Farsi equivalent of clove, is rooted from Farsi words for coronation or a sun crown. The reason is that cloves were among flower buds used during the coronation of ancient Greek monarchs.

Today, this flower often symbolizes love, pride, superiority and attractiveness. In the Kurdish culture, red apples are usually picked to be ornamented with cloves and are given out as a sign of love and fidelity.

Over the past years, some Non-Governmental Organizations in Kurdish areas also prepared clove-nailed apples and sold them to help those in need or the victims of natural disasters, a move which is both an offering of friendship and an act of charity.

Just a few days ago, the minister for cultural heritage, tourism and handicrafts, in a letter, authorized this Kurdish tradition to be nationally registered as an intangible cultural heritage of Kermanshah Province to ensure its perpetuity.