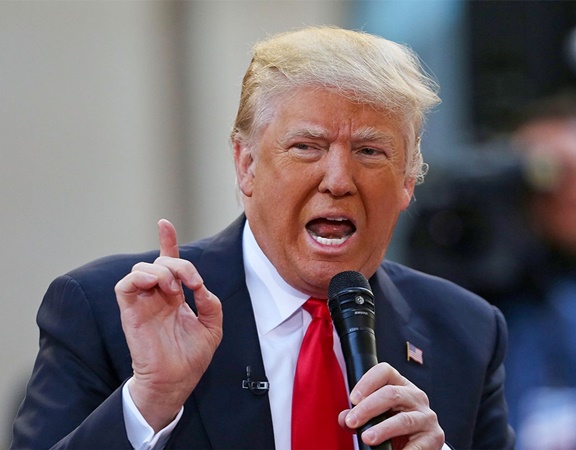 US Republican presidential candidate Donald Trump said on Tuesday that Democrat Hillary Clinton's plan for Syria would "lead to World War Three," because of the potential for conflict with military forces from nuclear-armed Russia.

According to a report by Retuers, as covered by IRNA, in an interview focused largely on foreign policy, Trump said Clinton could drag the United States into a world war with a more aggressive posture toward resolving the Syrian conflict.
Trump said defeating the ISIS is a higher priority than persuading Syrian President Bashar al-Assad to step down, playing down a long-held goal of US policy.
Trump, at the same time, said Assad is much stronger now than he was three years ago and said getting Assad to leave power was less important than defeating the ISIS.
Clinton has called for the establishment of a no-fly zone and “safe zones” on the ground to protect non-combatants. Some analysts fear that protecting those zones could bring the United States into direct conflict with Russian fighter jets.
“What we should do is focus on ISIS. We should not be focusing on Syria,” said Trump. “You’re going to end up in World War Three over Syria if we listen to Hillary Clinton.
Clinton’s campaign dismissed the criticism, noting that both Republican and Democratic national security experts have denounced Trump as unfit to be commander-in-chief.
“Once again, he is parroting Putin’s talking points and playing to Americans’ fears, all while refusing to lay out any plans of his own for defeating ISIS or alleviating humanitarian suffering in Syria,” Clinton spokesman Jesse Lehrich said in a statement.