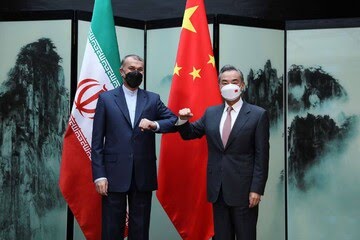 Chins's foreign minister has called for speeding up the implementation of Tehran-Beijing strategic partnership Agreement.

Wang Yi made the remarks in a Thursday meeting with Iran’s  Foreign Minister Hossein Amir Abdollahian on the sidelines of the conference of the foreign ministers of Afghanistan’s neighbors in China.

Amir Abdollahian and China’s top diplomat and member of the Chinese State Council Wing Yialsi held talks over bilateral, regional and international issues.
The two foreign ministers underlined the need to speed up finalizing introduced projects and to continue consultations over expansion of economic cooperation between Tehran and Beijing.
Amir Abdollahian extended President Raisi’s greetings to the Chinese president and, given the strong support of the high-ranking officials of China and Iran for bilateral cooperation, underlined the need for realizing the huge potentials of the two nations, especially in economic spheres. Iran’s foreign minister further referred to the importance of popular exchanges between Iran and China. Amir Abdollahian then described the facilitation of the return of Iranian students to China as an effective move to this end.
He said although Covid-related restrictions prevented them from returning to China, it is appropriate that things would return to the pre-pandemic era with the cooperation of the relevant Chinese sectors.
The top Iranian diplomat referred to the Tehran-Beijing cooperation in international bodies, describing the joint fights against efforts to politicize the issue of human rights and against interference in the internal affairs of other countries as a key aspect of this cooperation.  AmirAbdollahian spoke of the illegal use of sanctions by Western governments against independent nations. He said fighting this issue is important for the purpose of helping stability and preventing crises.
Wang YI for his part extended the Chinese president’s warm greetings to President Raisi and appreciated the Iranian side’s participation in the third conference of Afghanistan’s neighbors.
Wang Yi then underscored the need for cooperation and close consultations between Tehran and Beijing to make their strategic 25-year pact operational and also the need for cooperation in international bodies.
The two foreign ministers also exchanged views on the latest developments in the Vienna talks and underlined the need to fight against unilateral and illegitimate sanctions imposed by some Western countries.