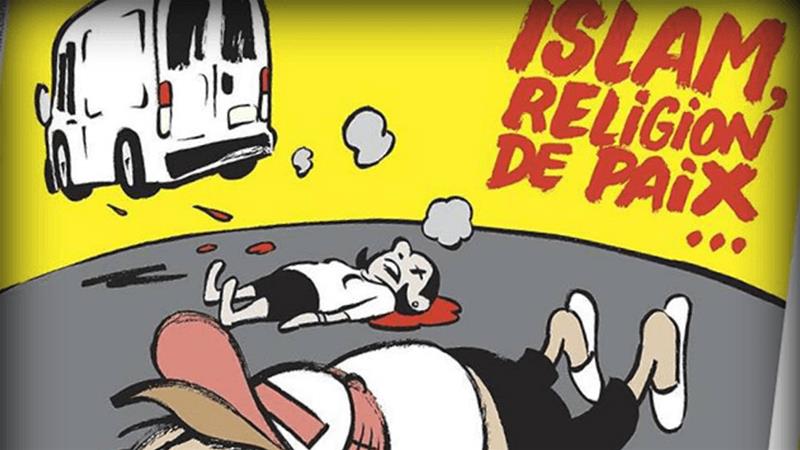 French satirical magazine Charlie Hebdo has once again drawn the ire of Muslims by publishing an insulting cartoon on Barcelona attack which left 13 dead and more than 100 others injured.

The cartoon depicts two people lying on the ground in a pool of blood after having been run over by a white van with the caption “Islam is a religion of peace….. eternal.”

Critics including Muslims and non-Muslims have seen the cartoon as suggesting Islam is an inherently violent religion.

Some of the leading magazines across the world have blamed Charlie Hebdo for publishing the cartoon, arguing that Charlie Hebdo has gone too far as the drawing was “Islamophobic”, “racist” and “revolting”. They say unlike what the staff of Charlie Hebdo maintains, such cartoons only hurt freedom of expression.

Even some of French politicians slammed Charlie Hebdo. Socialist MP Stephane Le Foll called the cartoon “extremely dangerous” and warned such association of ideas between Islam being a religion of peace and the violence of the attack could be used by others.

“When you’re a journalist you need to exercise restraint because making these associations can be used by other people,” he said.

In an editorial, Charlie Hebdo’s editor Laurent Sourisseau explained his editorial choice by saying experts and policy-makers are avoiding asking hard questions out of concern for moderate Muslims. “The debates and questions about the role of religion and in particular the role of Islam in these attacks have completely disappeared,” he added.

The magazine, notorious for its provocative and politically incorrect stance, regularly mocks religions including Islam.

In January 2015, Charlie Hebdo was the target of a terror attack. Two gunmen walked into the magazine’s offices in Paris and opened fire, killing 12. The magazine had previously published a number of controversial caricatures of the prophet of Islam.