British top diplomat: We will repair economic ties with Iran 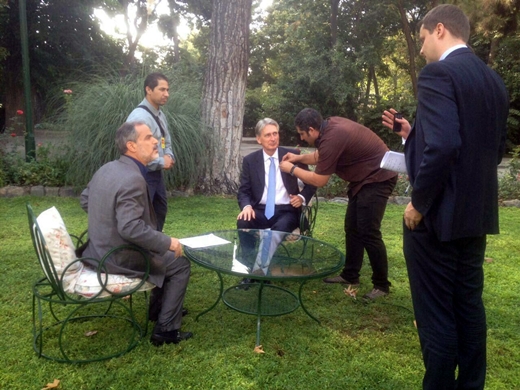 The British top diplomat has said that London and Tehran are expected to have dialogue, not confrontation, in all areas, whether they agree or not.

British Foreign Secretary Philip Hammond has said that London is seeking to repair its economic ties with Tehran.

The British top diplomat made the remark in an exclusive interview with the Islamic Republic of Iran News Network (IRINN) and added that London wants to be part of the growing economic activities in post-nuclear deal Iran.

Iran is implementing its commitments within the framework of the Joint Comprehensive Plan of Action (JCPOA), sanctions are about to be removed and Iran’s assets are to be unfrozen. Iran’s economy will start to grow rapidly and this will open up an opportunity for international companies to invest in and do business with Iran. London wants to be part of the economic development drive in Iran in the coming years.

Zarif and I know each other well. We spent many days together during nuclear talks in Geneva and Lausanne. During the talks, we raised a lot of issues on different fronts. Britain and Iran see eye to eye on some issues and are at odds over others.

We came to agree that we’d better pursue things through dialogue rather than confrontation, whether we agree or not.

Prospects of ties with Tehran

Since two years ago when President Rouhani was elected, we’ve witnessed a steady growing trend in ties between the two countries, especially after a meeting between Prime Minister David Cameron and [President] Rouhani on the sidelines of the UN General Assembly session in New York last year.

Now JCPOA has been added to the current trend. This trend is a new opportunity for us to resume bilateral ties which were plagued by multiple difficulties in the past. London and Tehran should look for [new] areas to work on. We [London and Tehran] share similar views on the challenges the world is facing. We also need to work out a strategy to manage the areas over which we remain divided.

How to win Iran’s trust

Let me be clear. The British people have no trust in Iran either. I should say that deep-seated distrust has grown between the two sides and this has its roots in the past developments and a lack of understanding of the other side’s viewpoints.

To leave behind this stage and facilitate the affairs, we need to improve the atmosphere; we should let the Iranian and British people have contacts, boost relations between businessmen and university institutes of the two sides, upgrade cultural ties and set the stage for the two sides to have more exchanges and carry out more studies.

Ties between the two nations

People in the two countries should know each other. More familiarity and mutual understanding will reduce misunderstandings. Through bilateral contacts, dialogue and development of an understanding of the other side, we can improve London-Tehran ties.

Iran has re-started to take measures to join global markets, and – as a result – the Iranians will be able to freely go abroad and pursue their studies. The British people too can visit Iran.

We need to develop a better understanding of each other through official meetings. The two countries have reopened their embassies and this means the two sides have the opportunity to hold regular talks [at higher levels] rather than occasional meetings at foreign ministerial level.

What builds trust is compliance by all parties to the talks between Iran and P5+1 with all agreements based on the text of JCPOA. All sides have remained committed to such a trend. This commitment will bolster confidence-building measures.