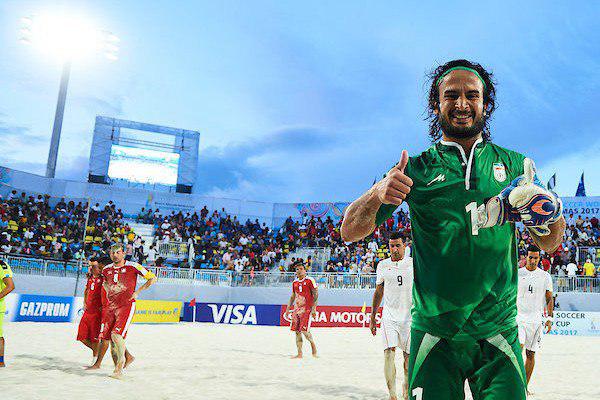 FIFA has congratulated Iran's goalkeeper on scoring the Goal of the Tournament at the recent FIFA Beach Soccer World Cup in the Bahamas.

FIFA, the international governing body of football, futsal and beach soccer, in an Instagram post felicitated Iranian goalkeeper Peyman Hosseini on winning the Goal of the Tournament award at the FIFA Beach Soccer World Cup Bahamas 2017.

According to a report by IFP, FIFA’s congratulatory message, which was posted along with a photo showing Hosseini in the tournament, read: “The #FIFABeachSoccer Goal of the tournament was scored… by a goalkeeper! Congratulations to #Iran’s @peymanhosseinii!”

From more than 260 goals scored at the FIFA Beach Soccer Bahamas 2017, it was ultimately, the very first goal scored at the tournament that captured the votes of thousands of fans from all over the world.

Just 19 minutes into the opening game of the tournament, Hosseini stunned the crowd when, deep into his own half, he coolly flicked it up with his right foot and then fired a volley across the pitch that ended in the top corner of the Mexican net. From that moment, the very first goal of the tournament was a contender for the Goal of the Tournament!

Hosseini’s strike defeated nine other incredible goals to become Goal of the Tournament.

Commenting on his award in a Farsi interview with the Tasnim News Agency, Hosseini said, “I became very happy at hearing the news. Nevertheless, Iran’s success to stand third at the tournament has helped this achievement of mine and other individual awards to become more valuable. In case we had not managed to finish in third place, none of these individual accomplishments would have had the same value they have now.”

Hosseini, who also won adidas Golden Glove award at the end of the tournament, was of great assistance to his side in their success to claim a historic third place finish in the meet.

Brazil was crowned champion after thrashing Tahiti 6-0 in the final.