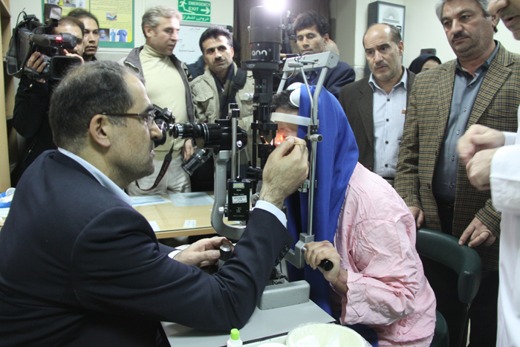 Iran’s health minister, who is a veteran ophthalmologist, has paid a third bedside visit to a 27-year-old woman who fell victim to an acid attack in Isfahan in late 2014.

Health Minister Hassan Hashemi, who is also a veteran ophthalmologist, has paid a third bedside visit in as many months to Soheila Jorkesh, a 27-year-old woman who fell victim to an acid attack in Isfahan in late 2014. The following is a partial translation of a report Shahrvand, a daily, carried on January 19:

On January 18, Hassan Hashemi paid a visit to Farabi Hospital in Tehran where Soheila Jorkesh is hospitalized to get the latest about her condition and the course of treatment.

After examining her eyes, Hashemi said, “Several operations have been performed on her injured eyes and skin so far to restore her vision. The corneas of both eyes along with the tissue that holds the eye lens have been damaged.”

Underscoring the efforts of the medical team to restore vision in the victim’s left eye, the health minister said, “Right now, she is in good condition. The response of the injured eye to light and movement shows that the eye nerve is not damaged, but more operations are required. If everything goes well, within three to six months a corneal transplant will be carried out.”

Highlighting the fact that the government attaches significance to meeting the needs of the victims, he added, “The government has tasked us with providing quality healthcare to all Iranians; that’s an obligation and we feel duty-bound to honor it. Of course, promotion of culture in society is an important matter which should not be neglected, so that such aberrant behaviors which are below the dignity of the Iranians are not repeated.”

Hashemi stated, “Over the past two decades, there have been several acid attacks as a result of which some people have sustained serious injuries or even lost their sight. We should not allow such incidents to take place in our society.”

The health minister went on to say that ever since the incidents in Isfahan, there have been a number of other acid attacks mostly because of personal motives or family feuds.

Hashemi said that the interior minister has been following up the case to identify and arrest those behind the acid attacks.

Saying that government will pick up the tab for all treatment fees, the health minister added, “If the victims needed to be treated abroad, the fees would be paid. However, for the time being, there is clearly no need for such a move.”

Dr. Hashemi is no stranger to visiting patients in hospitals. After an acid attack in November, he paid a bedside visit to Dr. Siamand Anvari, the administrator of Tehran’s Ziaeian Hospital who had fallen victim to a professional feud. He also visited six children who sustained injuries following a landmine explosion in Kurdistan Province; he even performed eye surgery on one of the victims, Shokhan, a 7-year-old girl.