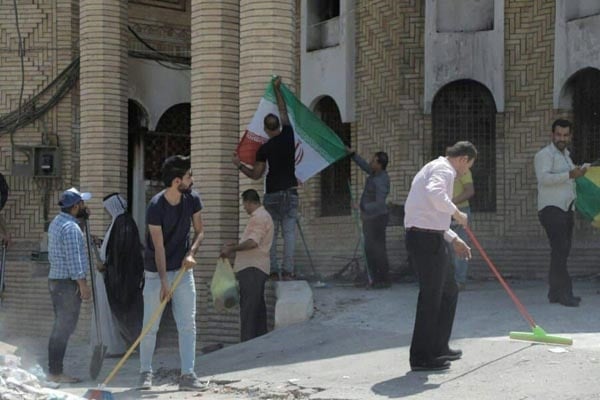 A group of Iraqi youths from the southern city of Basra have symbolically cleaned up the damages inflicted by a group of attackers on the former building of Iran’s consulate in the city to show the depth of the friendship and brotherhood between the two nations.

The youths gathered in and symbolically cleaned the former building of the Iranian consulate in Basra which came under attack and was burned by a group of attackers last Friday.

The youths also hoisted the national flag of Iran at the building and hanged the photos of the Founder of the Islamic Republic Imam Khomeini and the Leader of the Islamic Revolution Ayatollah Seyyed Ali Khamenei on its walls to show their deep solidarity with the Iranian people after the consulate building was attacked and torched on September 7.

The move came after a public committee charged with holding rallies in Basra issued a statement and acquitted itself of any involvement in the violent attack on the Iranian consulate in the city. It also vehemently condemned any attack on the governmental buildings, Popular Mobilization Units’ centres and Iran’s consulate. 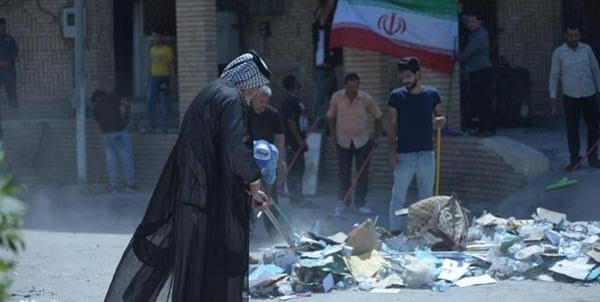 The statement then underlined that a group of missionaries affiliated with Ba’ath party and ISIS have launched the attack and the people in Basra had no role in the sabotage.

The symbolic move by the Basra youths also came one day after Iran’s ambassador to Iraq opened a new consulate in the southern port city.

“I’m here to inaugurate the new premises of our Consulate in Basra…because we don’t want to lose a single day in offering services to the people of Basra,” Ambassador Iraj Masjedi said on September 11.

The Iraqi government said an investigation has begun over the performance of the security forces responsible for protecting the mission.

This comes as many Iranian pilgrims are expected to visit neighbouring Iraq later this month for Ashura, one of the most sacred days in the Shiite religious calendar.

The city of Basra has seen the scene of growing protests in the past weeks. The protesters are angry with corruption and the lack of basic services and jobs in a province.