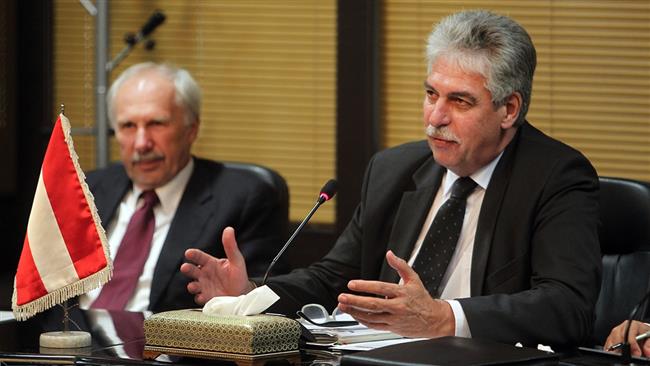 Austria says it has allocated a credit line of €1 billion for a major steel production project in southern Iran.

The announcement was made by the visiting Austrian Finance Minister Hans Jörg Schelling during a visit to Tehran.

Schelling was quoted by Iran’s IRNA news agency as telling his Iranian counterpart Ali Tayyebniya that the credit line was meant to help the expansion of relations between the two countries.

IRNA further quoted him as saying that Austria’s banks were eager to promote relations with Iran’s banks.

For his part, Tayyebniya called on the Austria government to do more to help expand economic relations with Iran.

He emphasized that fighting money-laundering – as well as funds with suspicious origins – were central themes in the plans of Iran’s banking system.

Austria’s steel production investment plan in Iran involves the establishment of a plant with a capacity of 2.4 million tons per year in Gol Gohar in Iran’s southern province of Kerman.

To the same effect, Austria’s Voest Alpine has reportedly signed an agreement to team up with Iranian partners to establish a steel production plant in Gol Gohar.

On a separate front, Iran’s Minister of Industry, Mine and Trade Mohammad-Reza Ne’matzadeh told Schelling in a separate meeting that Iran expected Austria to adopt more hostile plans to expand trade relations between the two countries.

Ne’matzadeh emphasized that banking restrictions were the most important barriers that were obstructing the expansion of Iran-Austria relations.

The Iranian official further said companies from Iran and Austria were working over the production of low-consumption motors for automobiles.

He expressed hope that an agreement that the relevant parties had signed over this last year would lead to industrial production by 2020.